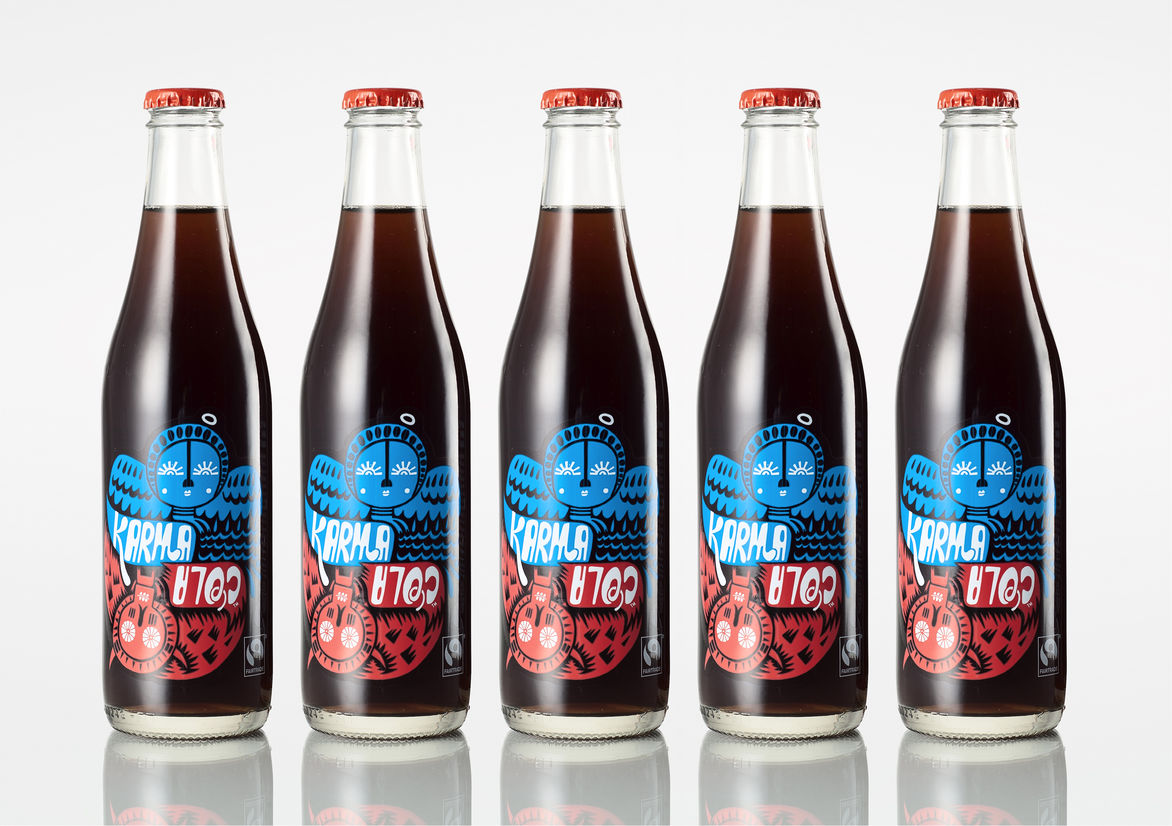 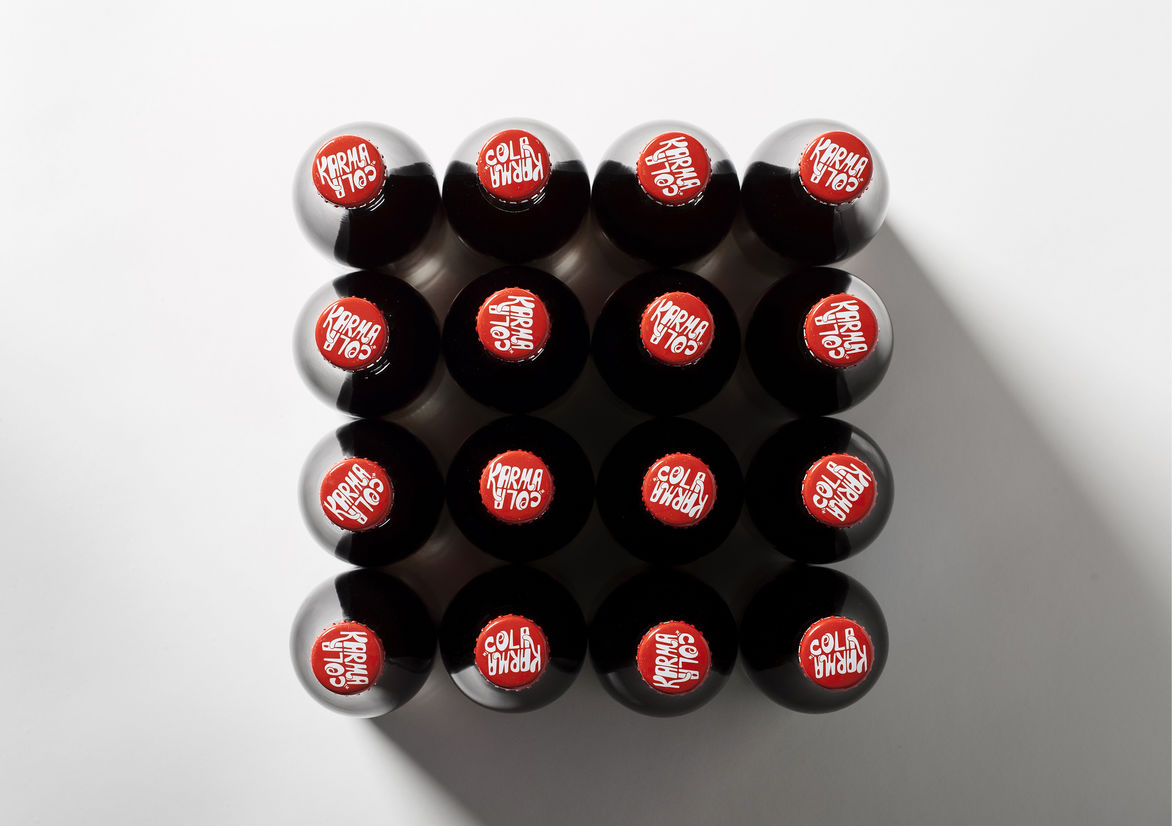 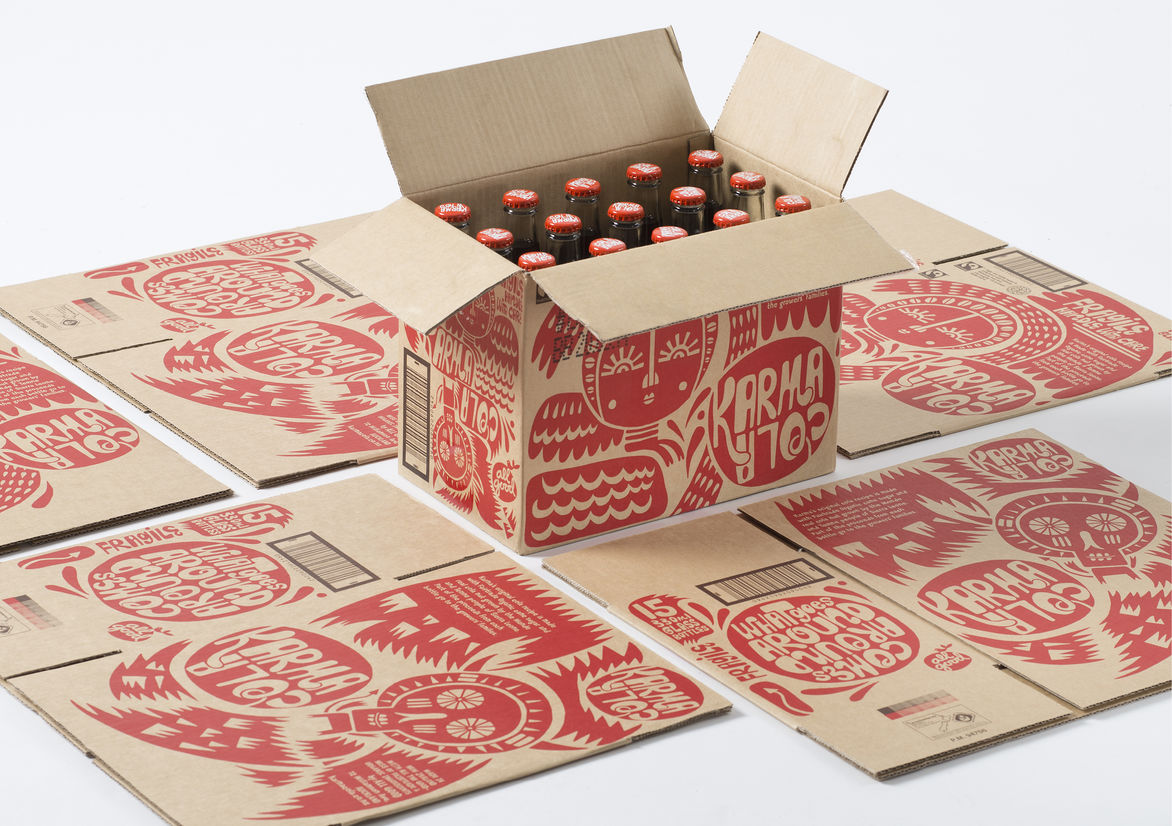 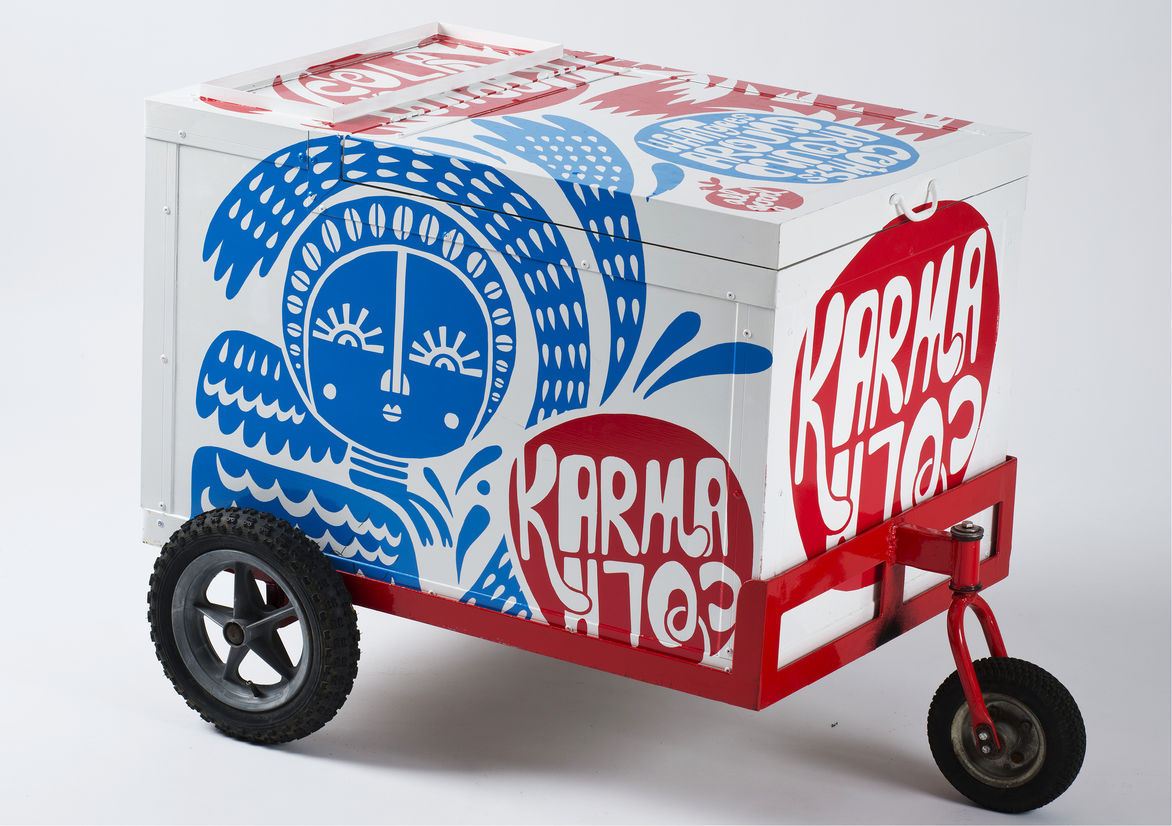 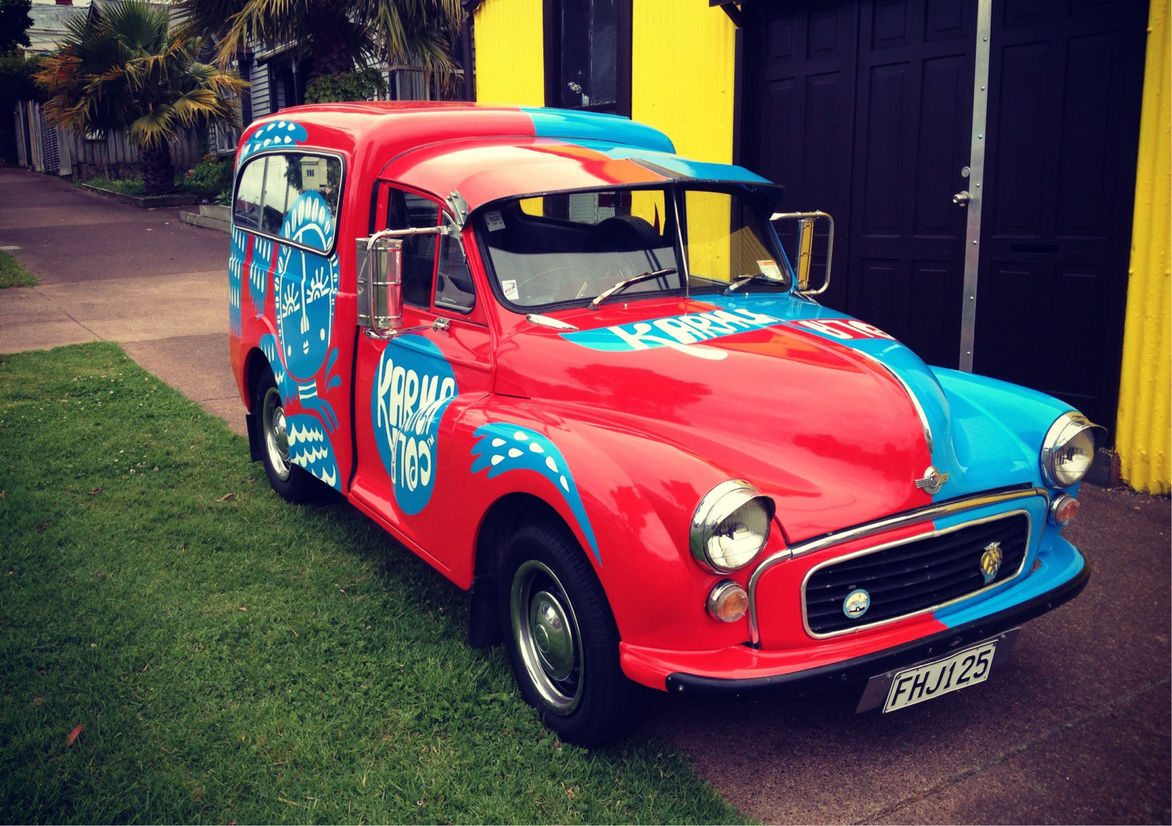 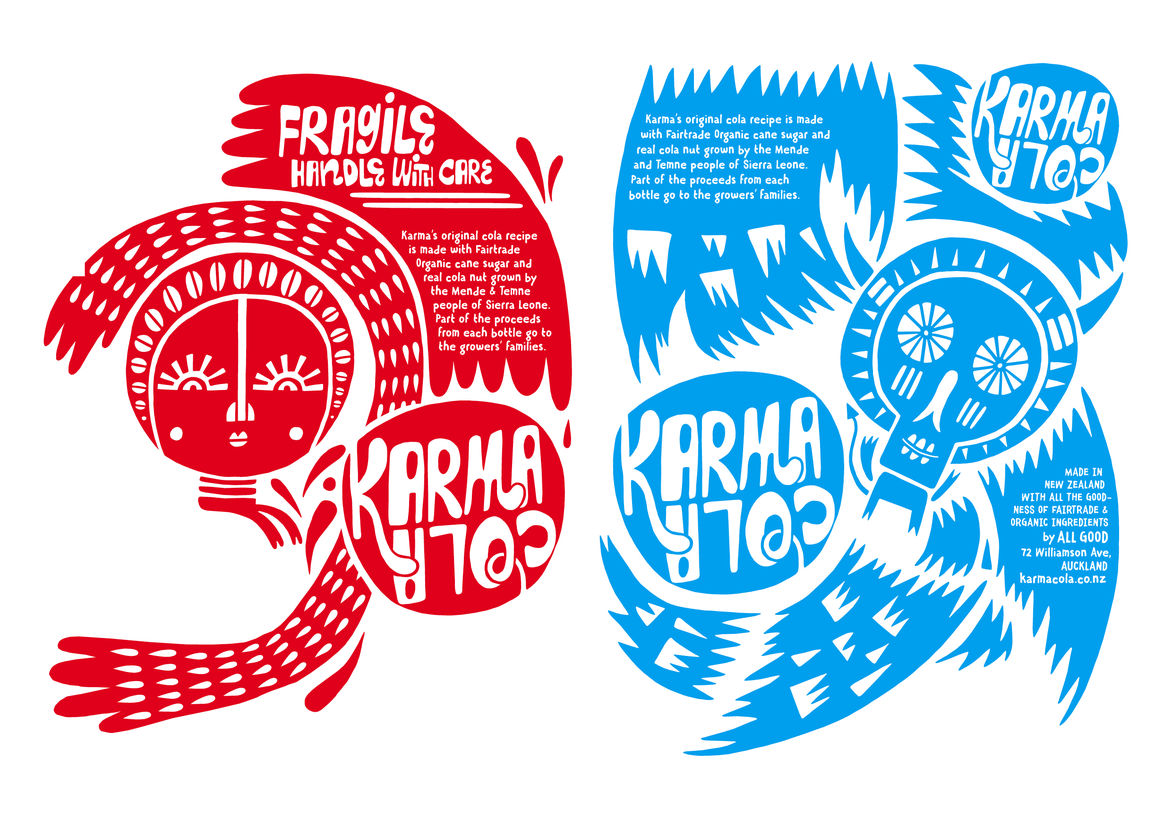 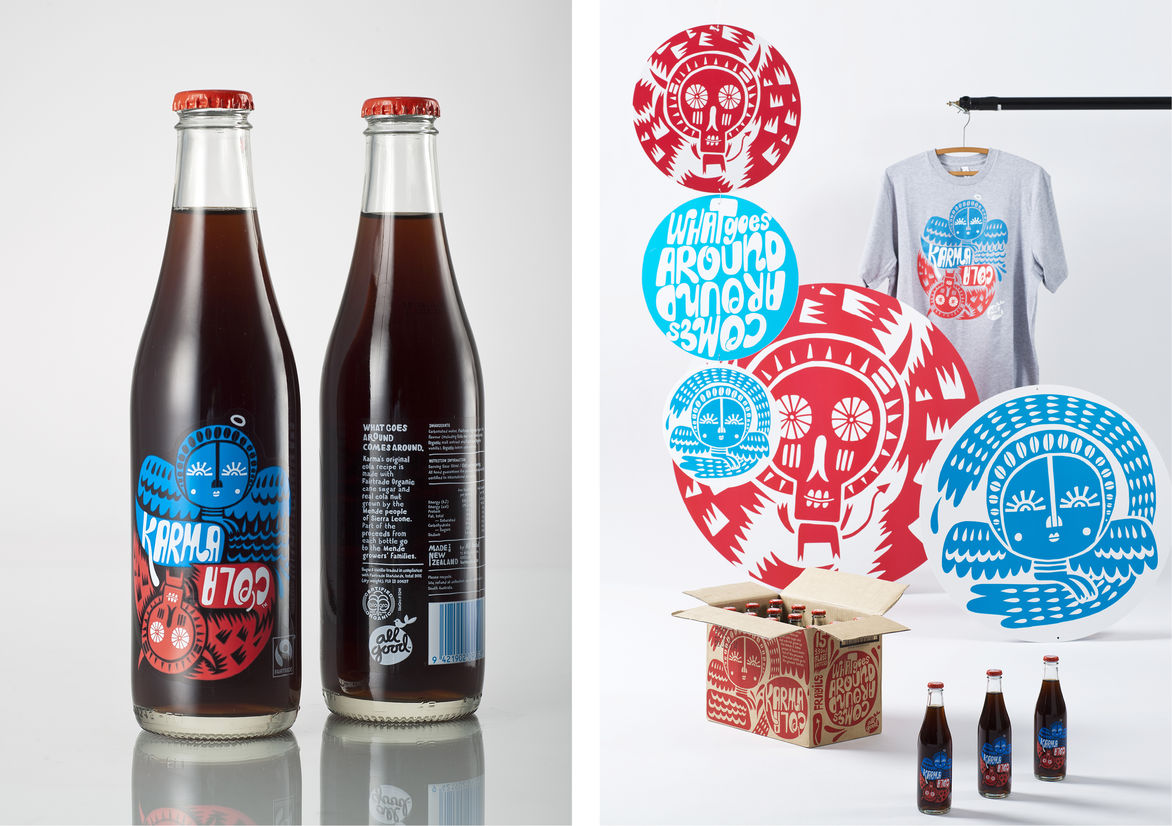 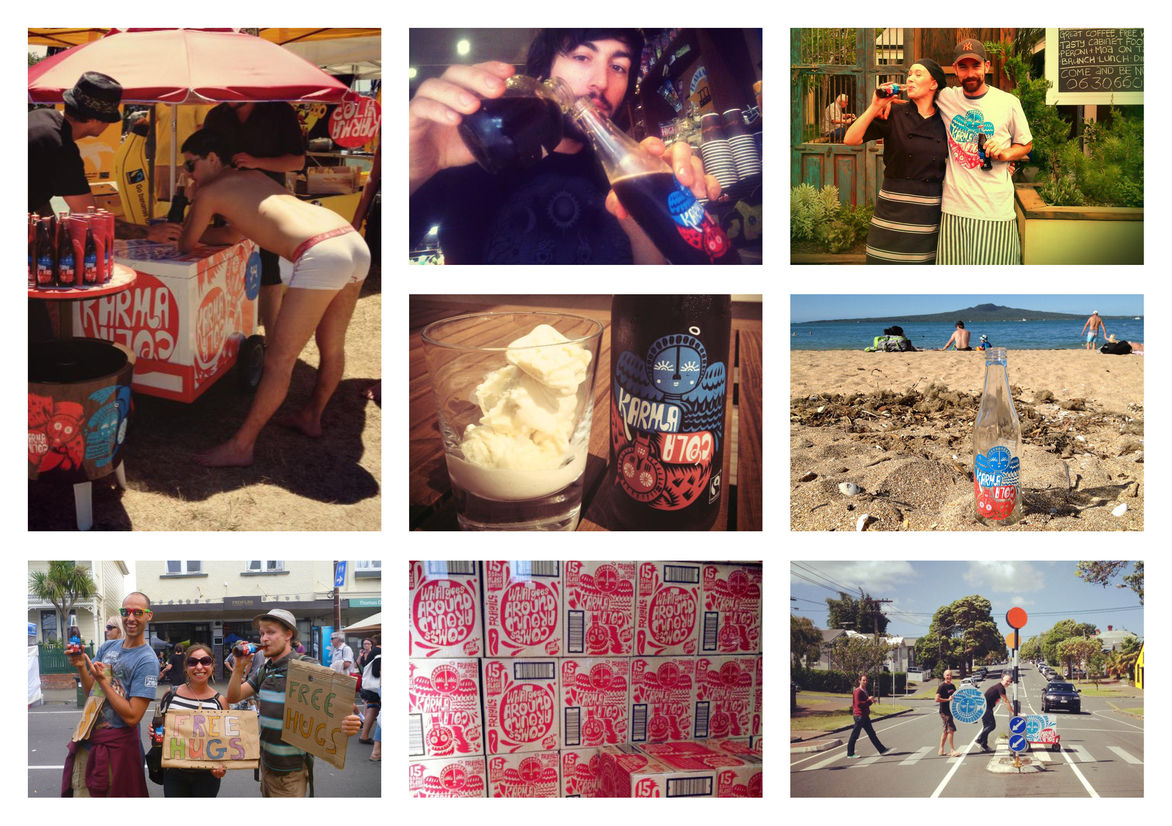 The entry brought together a compelling piece of story telling with obvious craft and a strong singular idea that challenges a drinks segment dominated by the big players. . Memorable, fresh, witty and with an underlying good cause. What’s not to like about a project that delivers good Karma?

In the pockets of the world that are tiring of the outputs wrought by mass production, standardisation and exploitation, there are small revolutions occurring in product development. You can see these revolutions in the focus on provenance – constituent parts obtained fairly, a focus on sustainable lines of supply and ongoing relationships with primary suppliers.

This is, of course, a massive set-up Karma Cola, a beverage that wears its heart on its sleeve and tells its story through a number of mediums, especially online and through its distinctive graphic design elements, for which Special Group was awarded this year’s Purple Pin for Graphic Design.

The essence of the product, developed by All Good Organics, runs thusly: “Two years ago we had a crazy dream to offer consumers a fizzy drink that acknowledged and supported the people who originally discovered the name ingredient in the most consumed soft drink in the world – cola.”

Karma Cola is a reinvention of a familiar product; it’s the idea of the industrially uniform subverted with ideas of craft, fairness and subtle humour. For many consumers, the idea of cola is that of a mass-produced, corn-syrup-laden and artificially flavoured drink. It’s a guilty pleasure, and if you’re felling guilty enough drinking a sugar-laden drink you don’t really want to be supplanting that guilt with mental anguish about impoverished primary suppliers in Third World countries.

Karma Cola is made in New Zealand from natural spices, lemon, lime and orange oils, vanilla beans grown by the Forest Garden Growers Association in Sri Lanka, and organically grown and processed sugar cane from the Suminter Organic Farmers Consortium in Maharashtra India. But the key component of any real cola is the real cola nut. All Good get theirs from Boma village in Sierra Leone. It’s a product they found themselves, travelling to the country and organising a supply network on the ground, which has in turn given cola-nut farmers in the country an international profile and a market for a crop that traditionally was only locally traded. All Good returns proceeds from each sale of Karma Cola to the farmers. In a country that’s still recovering from a debilitating 10-year civil war, these efforts at helping build community infrastructure and sending kids to school are commendable.

This aspect of the product wasn’t lost on Special Group. Heath Lowe, the creative director on the project, describes the brief succinctly.

“All Good believes that if you’re going to drink something that has sugar in it, i.e. ‘bad’, it should at least be organic and Fairtrade, i.e. ‘good’. And they know their audience. They developed a cola whose ingredients come from developing nations — with profits from the sale of each bottle going back — ensuring money returns to communities and encourages growth. We thought that made for good karma and so Karma Cola was born.”

So karma it was. Special worked with artist Beck Wheeler on the bottle’s motif. The livery of red, white and blue echoes the typical colours of the major cola players, but through its stories of fairness and sustainability the product manages to subvert the ideas of coca-colanisation that pervades the major players. Wheeler developed the illustration and typography, which was applied to individual bottles, three-pack and fifteen-pack boxes, fridges, vans, cars, t-shirts and stickers.

The design blends African imagery with the Eastern idea of karma and the Western idea of ‘cola’. The blue and red design represents the African water spirit, Mami Wata. She is a two-sided being; reminiscent of the western ideas of angel and devil infused with ideas about what goes around comes around. It’s drawn in an African-craft style and it’s a lighthearted depiction, resolutely cheerful, and bears comparison of more western tropes of good and evil, the angel and the devil, all, naturally, detailed with cola nuts.