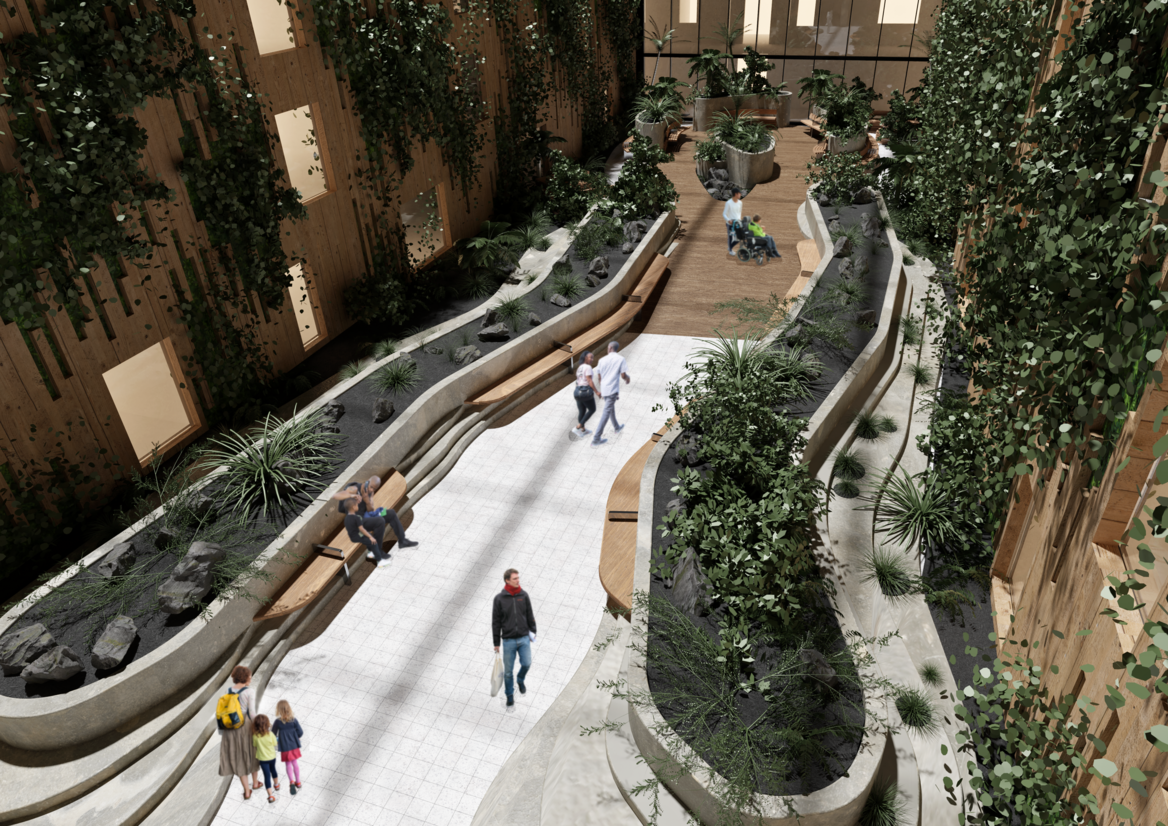 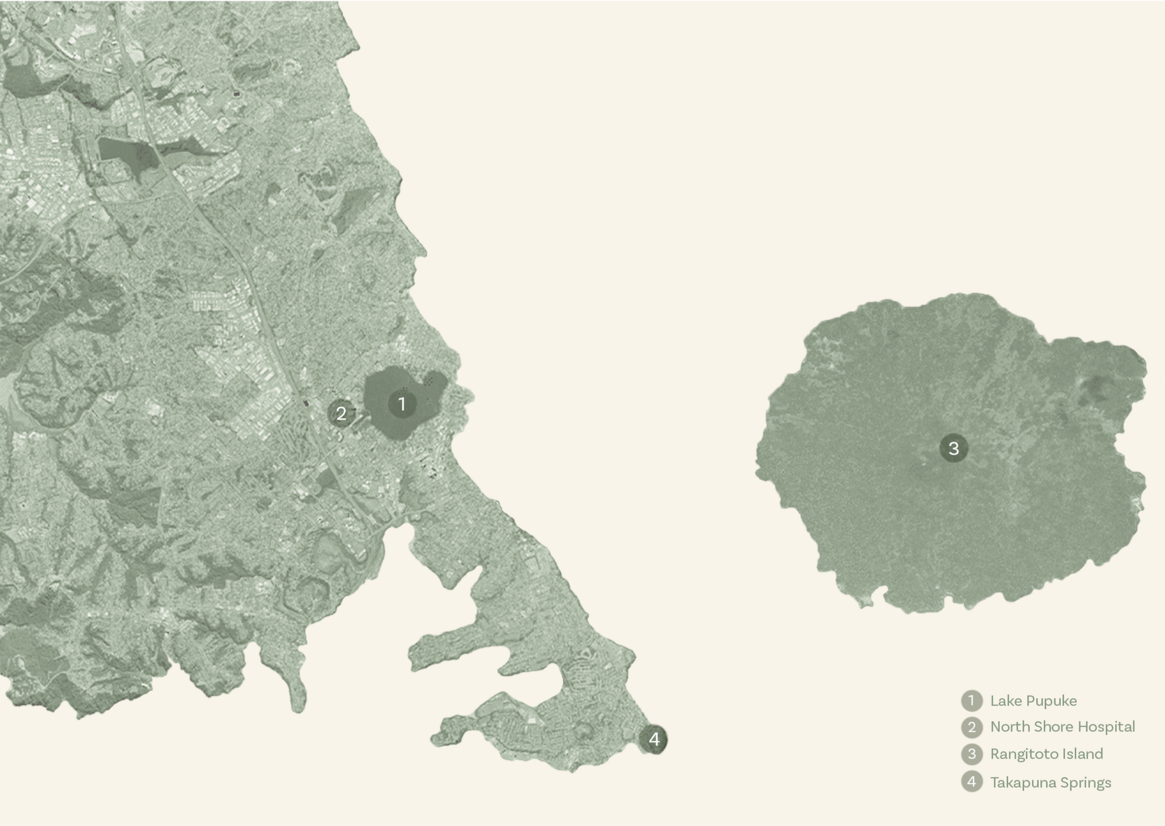 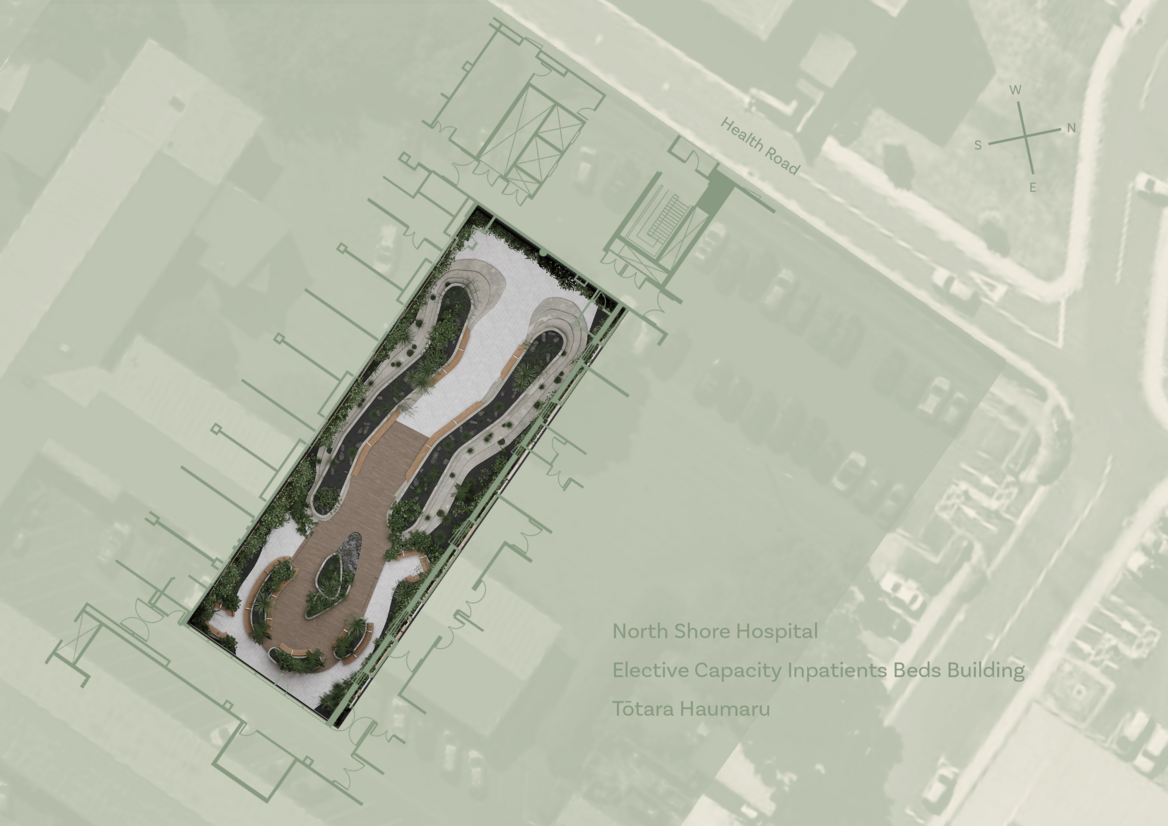 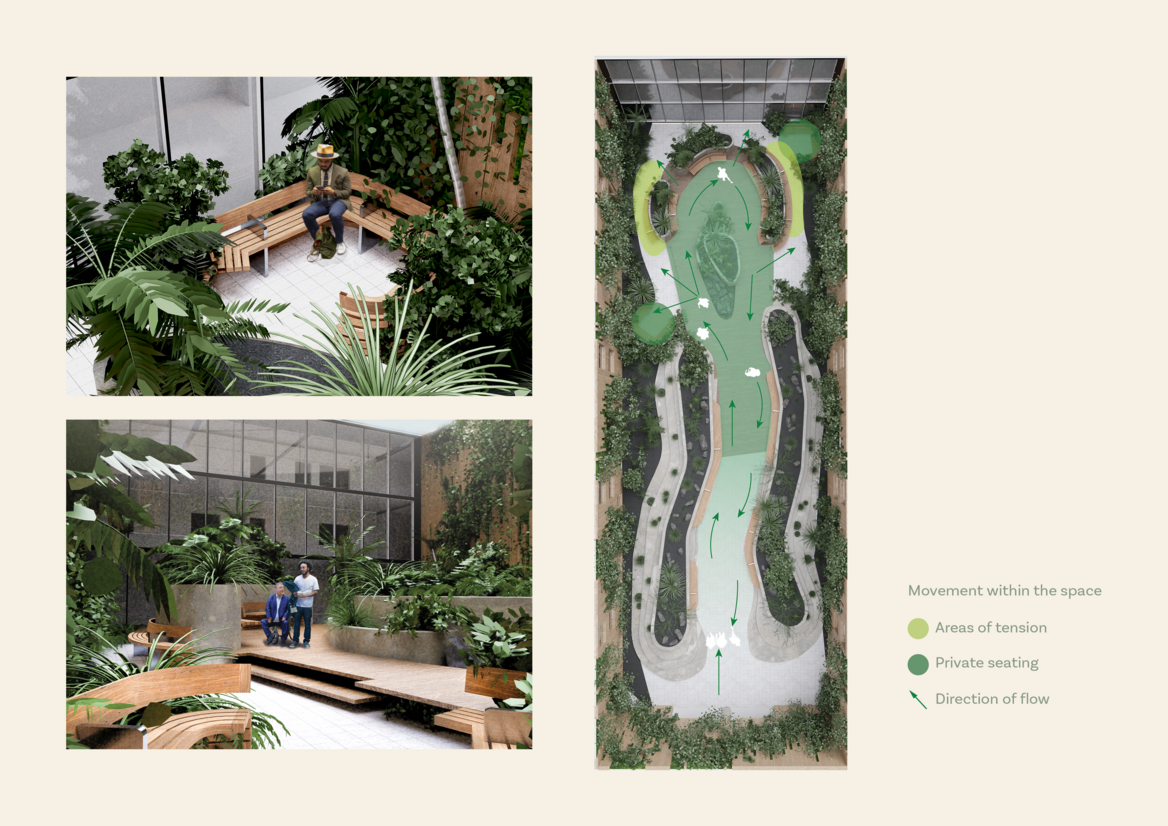 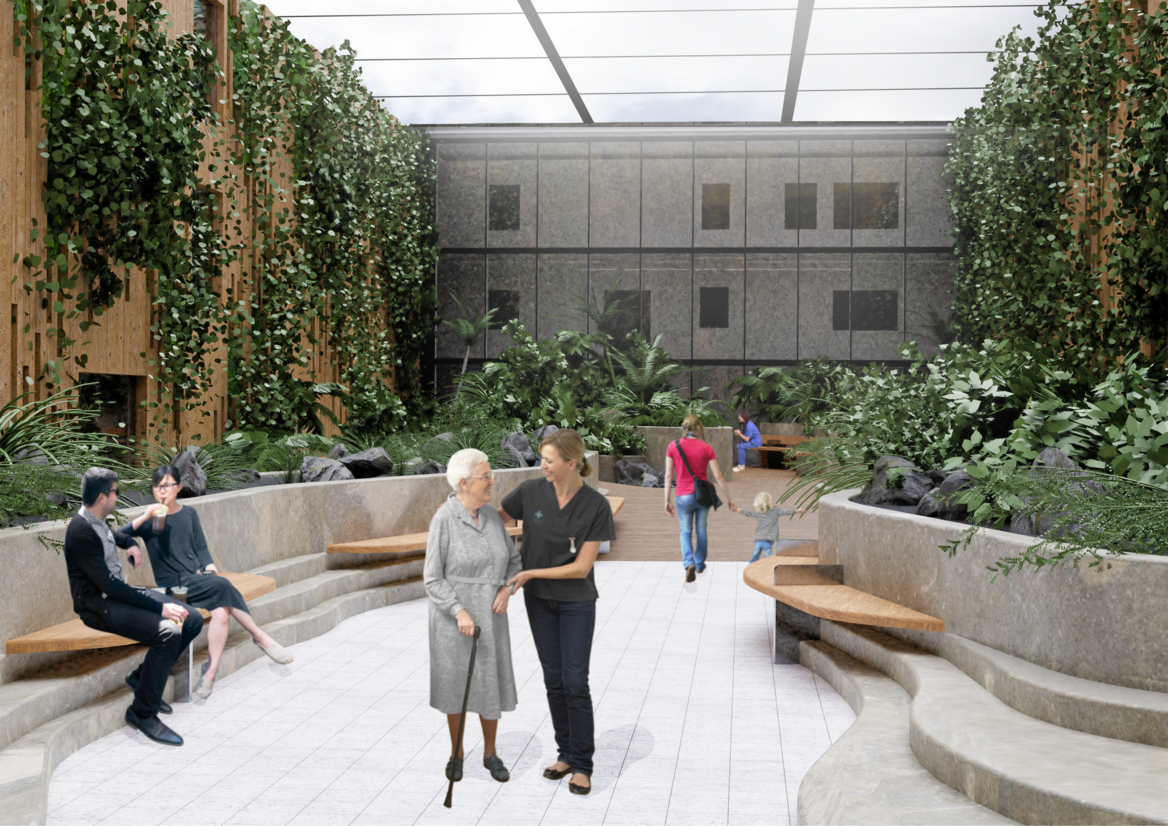 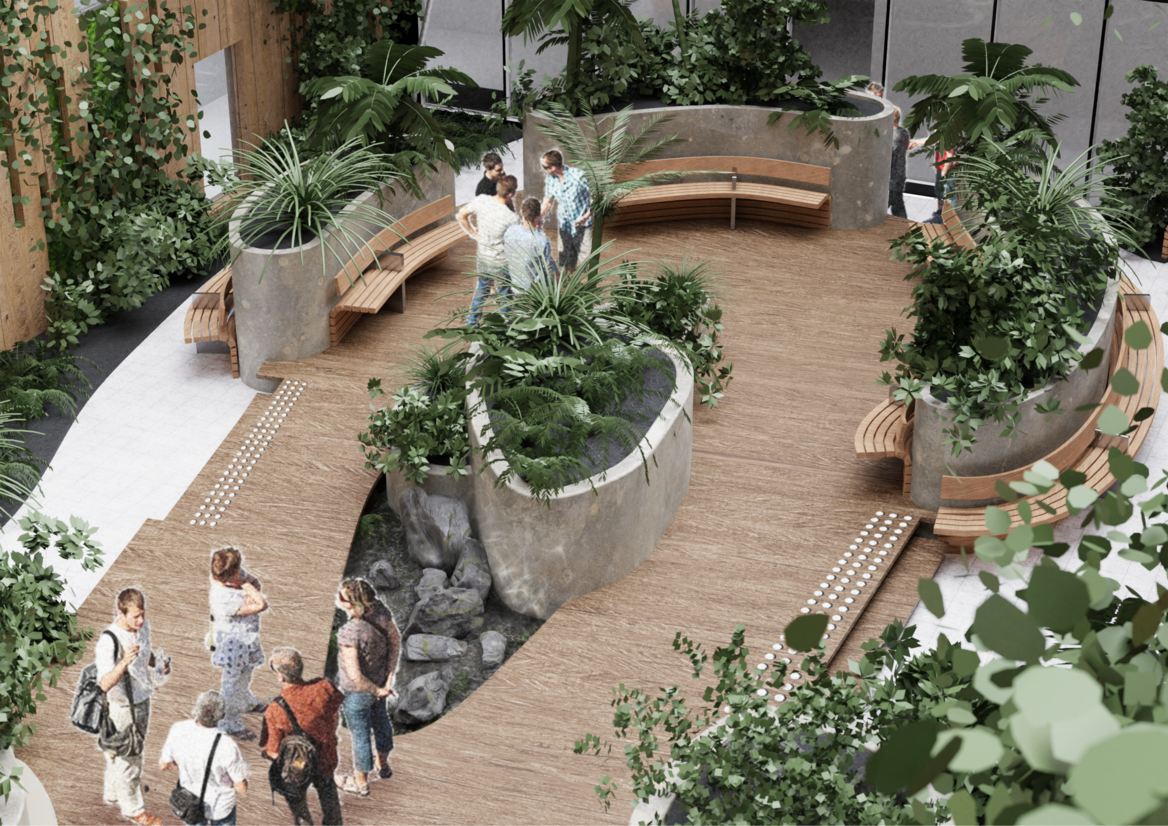 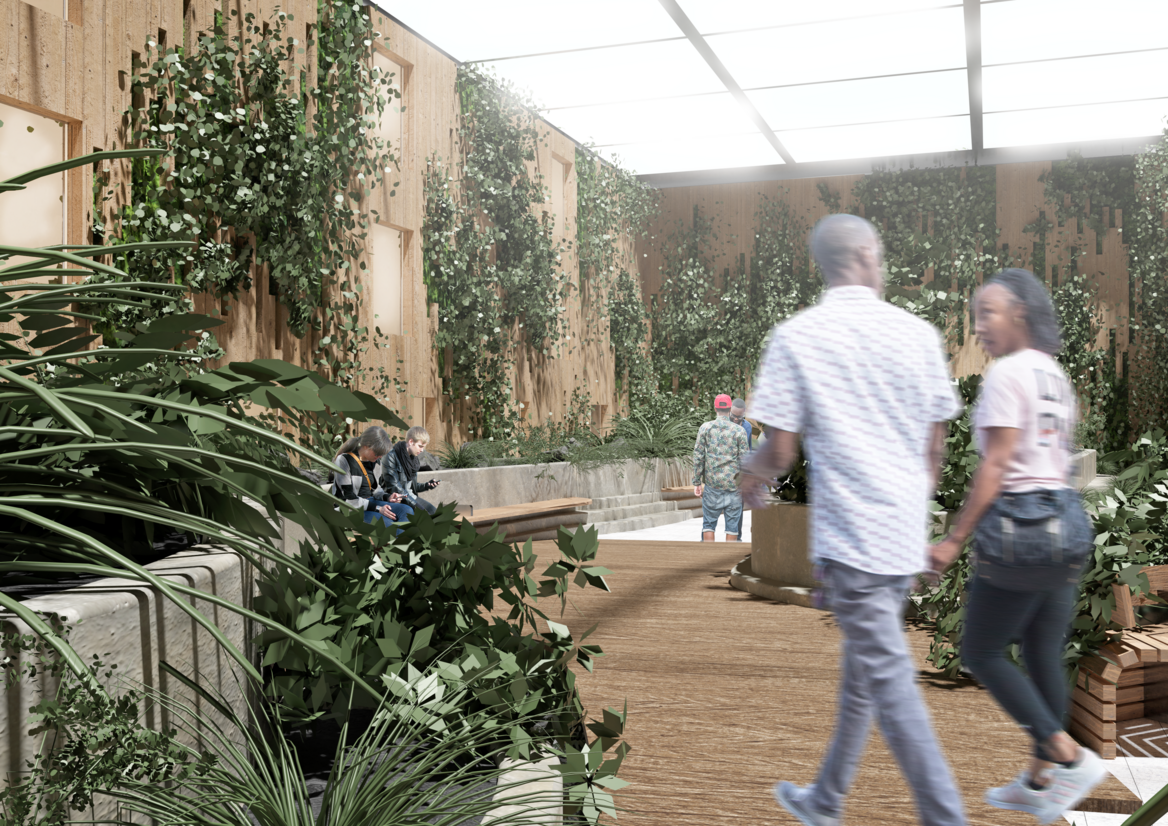 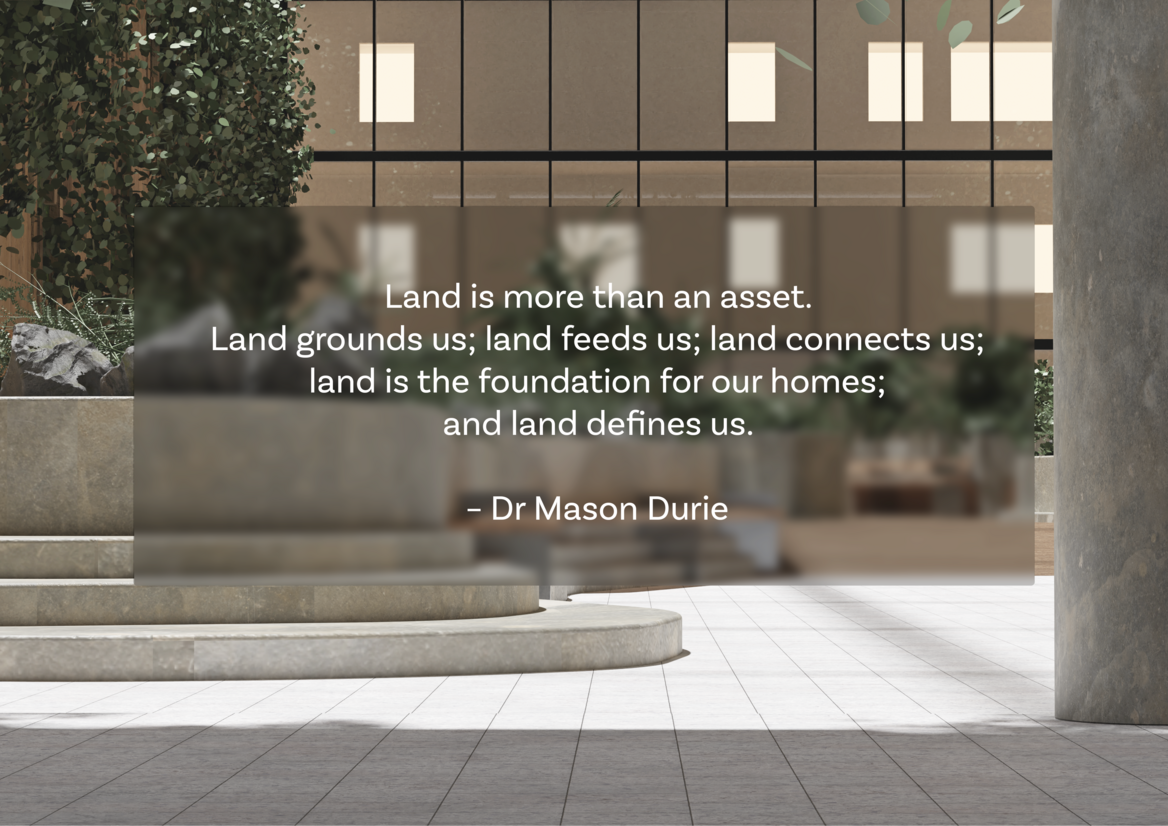 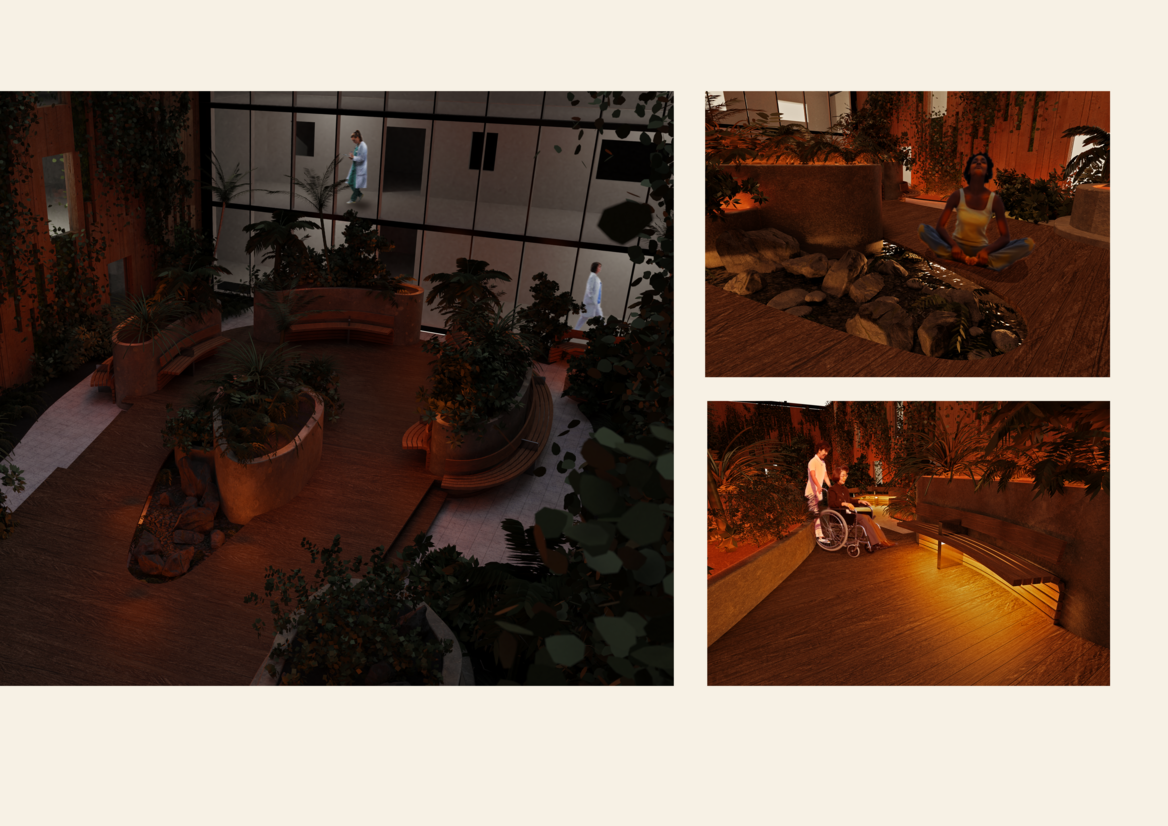 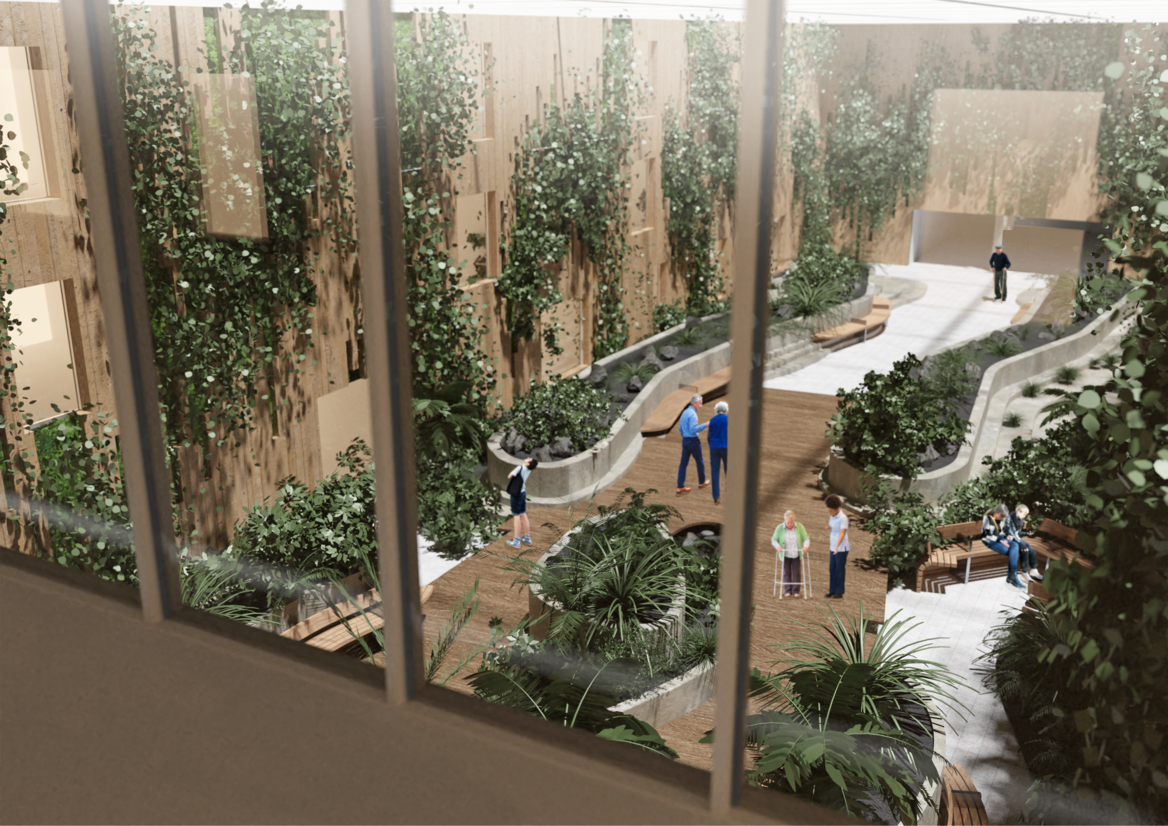 Through an immersive ethnographic research process at a North Shore Hospital main campus, we responded by reimagining the courtyard of the proposed Tōtara Haumaru building as an opportunity to offer a transformative welcoming experience, by bringing the two paradigms of healthcare and community together.

A goal was to highlight the importance of one's personal health journey and what health might mean to different people and to celebrate inclusivity for the diverse community of Aotearoa.

Site Analysis and research:
Lake Pupuke was formed from a Tupua couple, the children of the Fire Gods. The couple had insulted Mahuika the Fire Goddess, Mahuika had their home ripped out by Mataoho, the god of earthquakes, which is where Lake Pupuke stands. The earth was then thrown offshore, which became Rangitoto.  Our research acknowledged the diversity of Auckland’s community. Consequently, the inclusion of other models of healthcare was paramount. By coalescing themes across traditional healthcare models from around the pacific, we found Touch, Nature, Water, and Whanau were mostly universal concepts.

Our Concept
Rongoā Garden serves as a community hub offering space for both public and private interactions where families can heal, relax and recuperate. Through this concept we identified four modes of healing:

Touch: Spaces encourage intimacy and privacy. Visitors and patients can express care through physically touch.
Water: A small central pond provides an anchor for wayfinding; the flow of water over basalt rocks below the elevated deck pays homage to Takapuna.
Nature: Incorporating Rongoā Rakau, Rongoā Garden represents a Māori health journey. whilst complimenting other practices such as shin-rin yoku (Japanese forest bathing).
Whanau: The design encourages people to wander and sit within the garden as a place to unwind.

Within the space there is a zone of transition from public to private. Due to the restricted staff access toward the far end, a cul-de-sac is incorporated. This directs visitors from the entrance toward the staff area, before looping back to exit from where they entered. Foliage has been strategically placed to encourage privacy for patients occupying ground level wards to obscure windows from the public gaze yet allowing connections to nature for those in care.

Topography and Elevation: The subtle increase of elevation invites users to rise into the bush past forms inspired by Rangitoto’s lava flows.

Water feature: Representing Takapuna and the springs, this feature encourages interaction between users as a talking point, and site of reflection.

Lighting: During the evenings the garden is gently lit by warmer tones, creating a nostalgic outdoor effect within the space.

Seating: With thoughtful consideration to accessibility and inclusivity for the diverse community, various forms of seating are scattered among the foliage, some public and others more private. The seating at the entrance of the space is integrated into the garden beds and asks users to be more informal with their interactions. The seating towards the rear of the garden is more private and formalised, asking users to acknowledge each other's personal space.