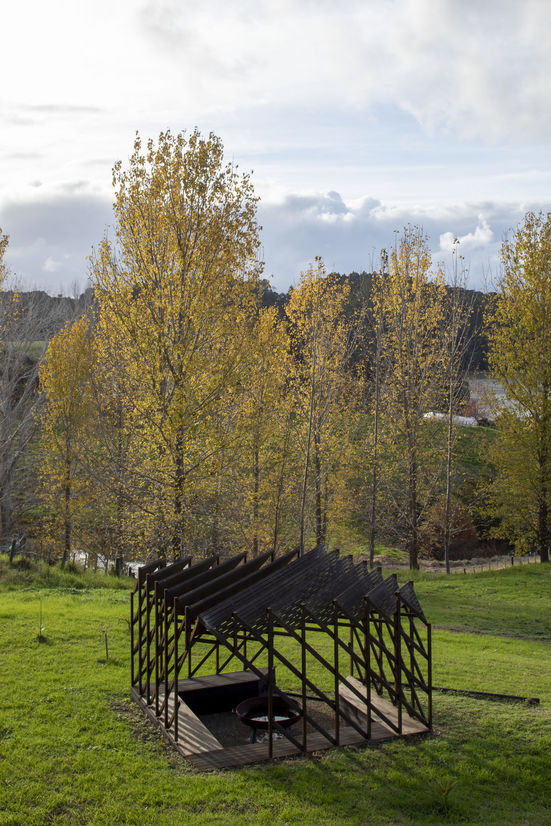 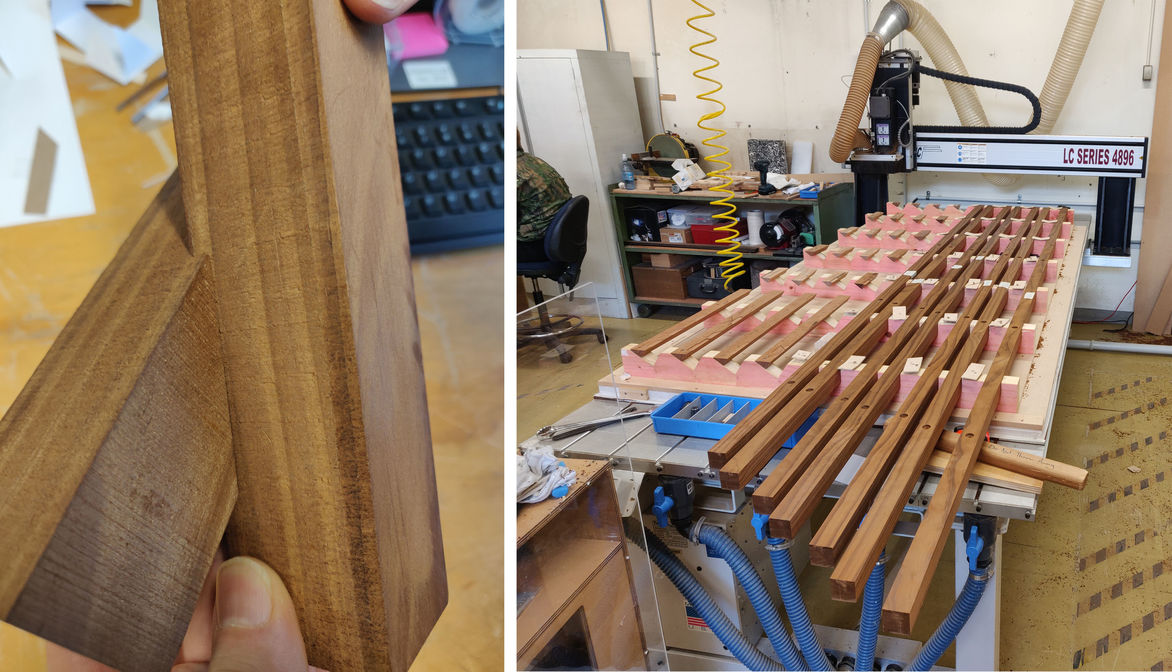 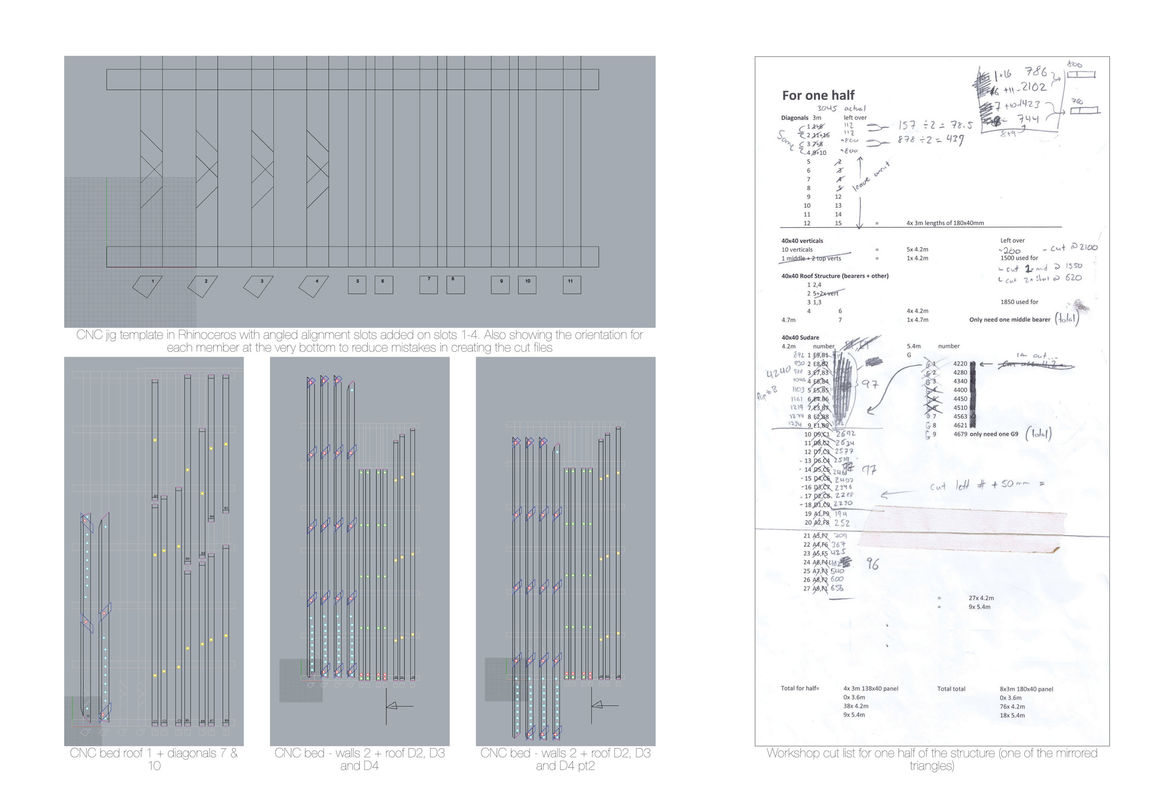 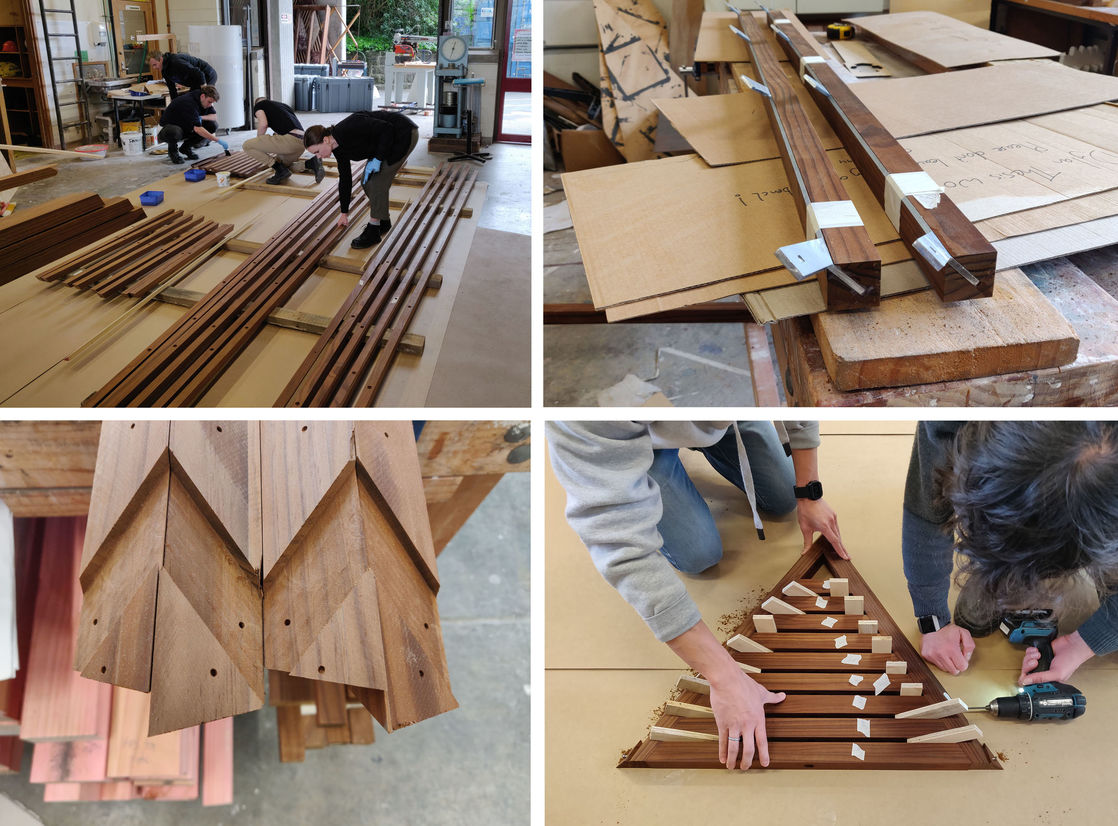 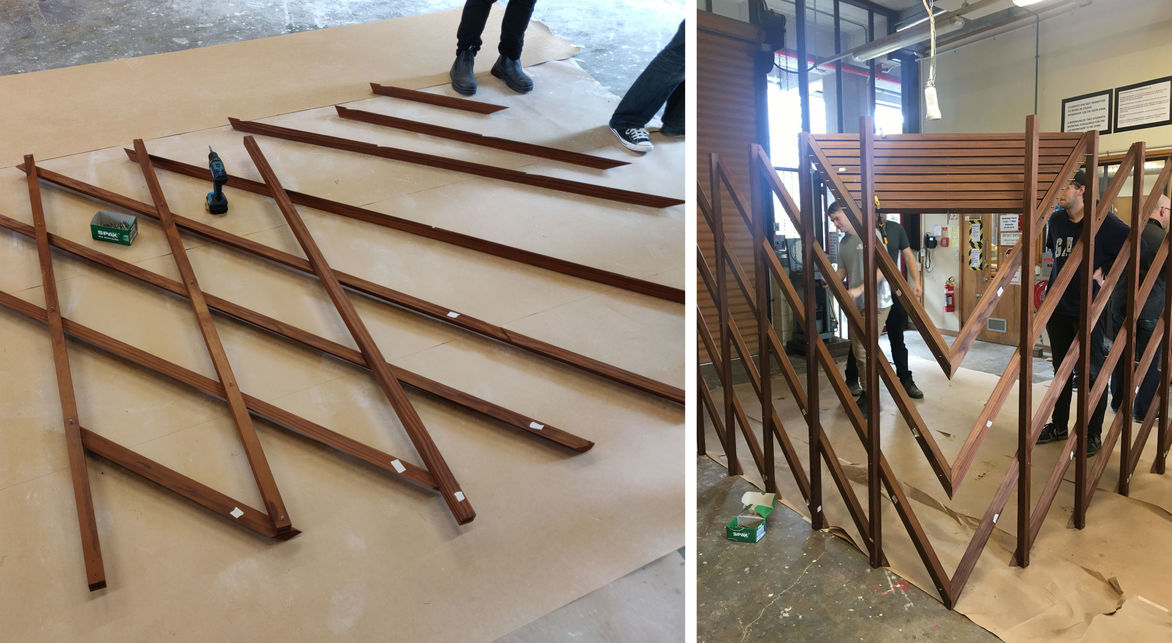 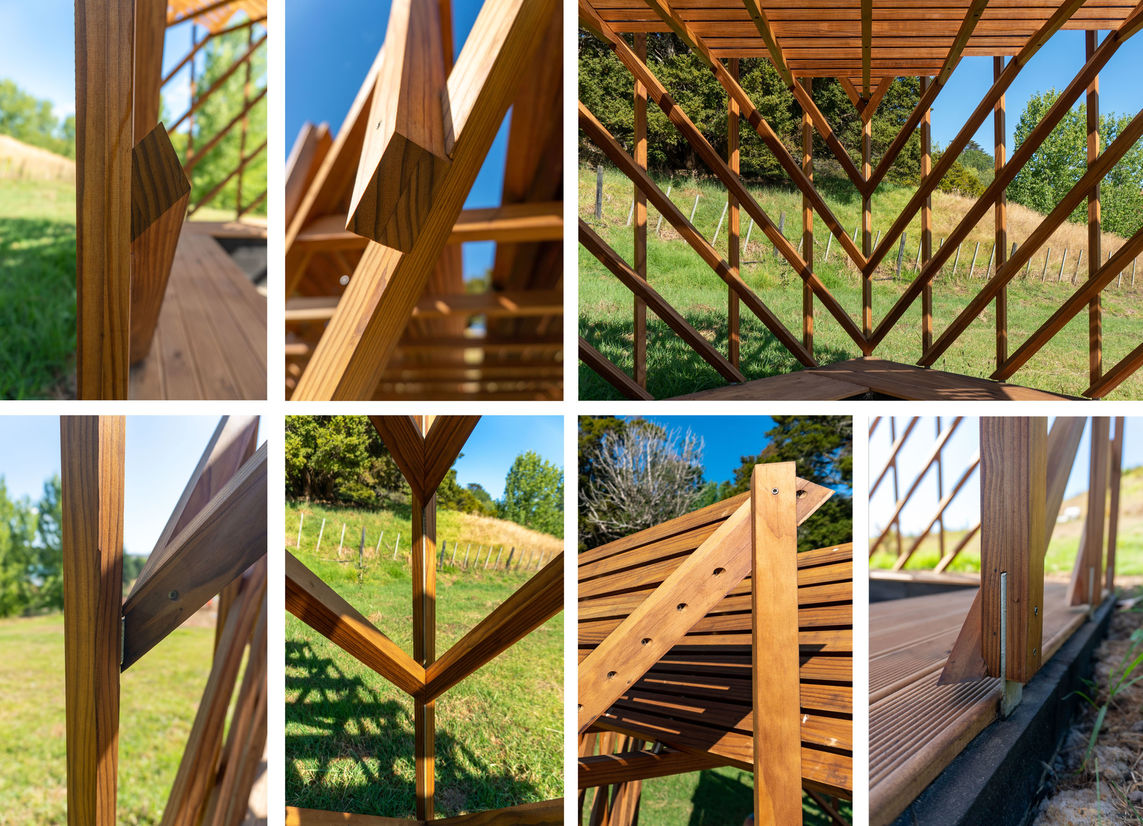 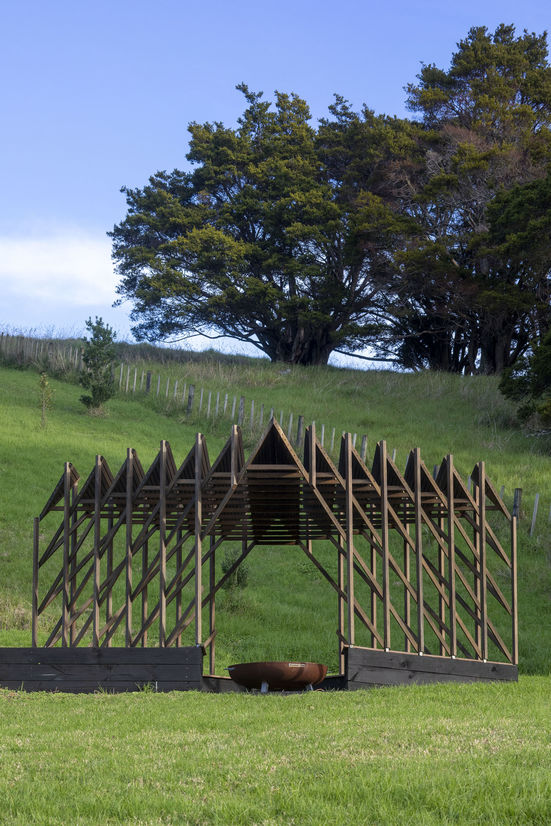 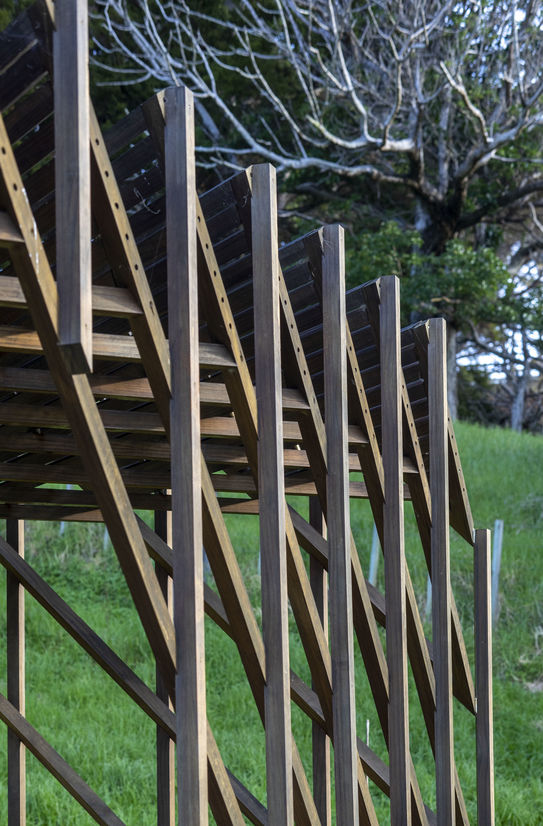 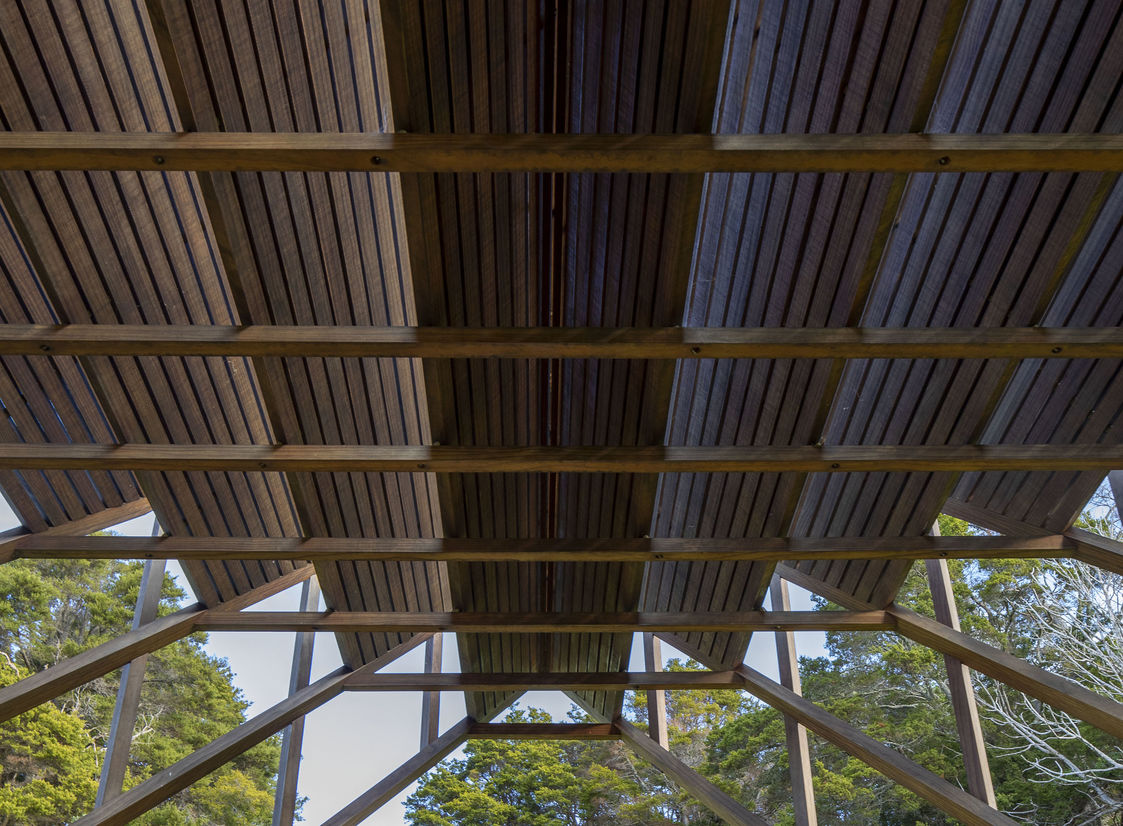 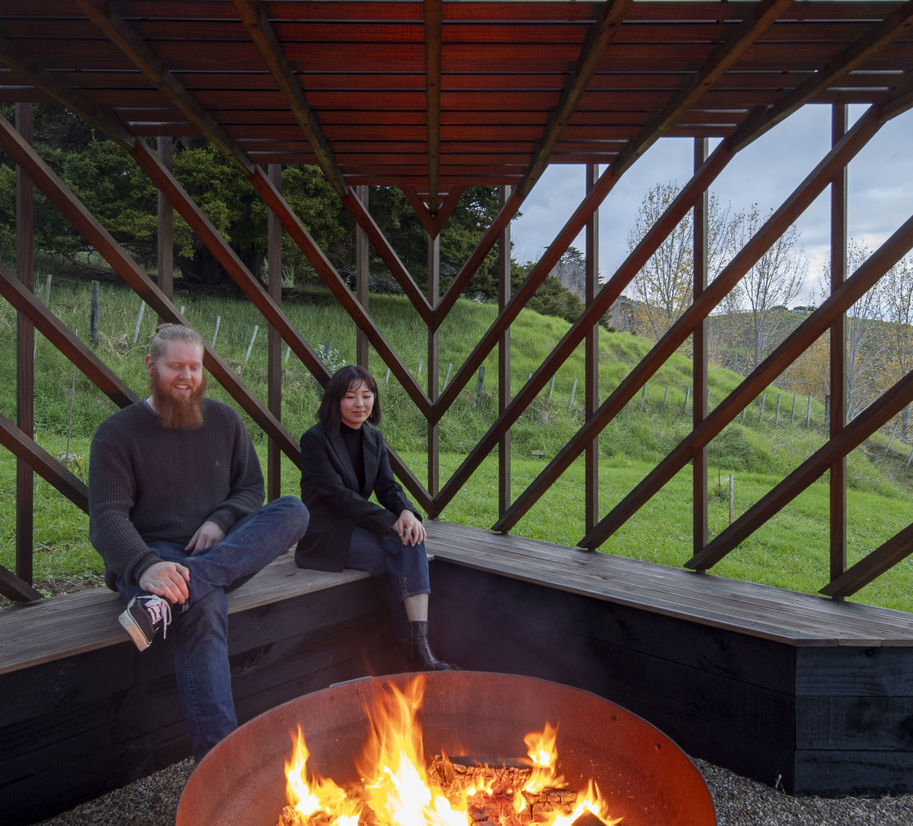 This project was to create a garden pavilion for a site overlooking a coastal inlet north of Auckland. Its roof consists of timber elements spaced slightly apart like sudare bamboo screens, intended to ensure that the structure is suffused with gentle shadow light, no matter the tme of day. The project also formed part of an ongoing research project to develop new, low-cost digital fabrication methods for solid timber.

This work focused on the development of a lightweight timber structure fabricated from relatively small structural elements with relatively complex machined joints. Such elements occupy something of a gap in the spectrum of digitally driven timber fabrication techniques available in New Zealand. Highly specialised milling machines can be used to fabricate heavy primary structural members, while smaller, less sophisticated and more widely available milling machines are used to mill sheet materials into small internal elements such as parts for cabinetry. Smaller, non-repetitive structural and finishing timber elements are typically now still fabricated by hand on the construction site.

The focus of this project was to devise a ‘hack’ of widely available flatbed milling machines to allow them to efficiently model and mill solid timber elements en masse—work that would typically require far more expensive and sophistcated machines. This involved developing digital processes for modeling elements and preparing cutting files, as well as the development of a jig system that allowed elements—including oversized elements—to rapidly be secured in the milling machine, milled, and removed for assembly.

The design employed a basic timber lap joint milled from 40x40mm Abodo Vulcan Screening battens—pine that has been treated to make it very straight and stable. A jig was developed in which members could be quickly but precisely loaded, a dozen at a time. The machine then cut the 5mm-deep lap joints (suffcient to create structural rigidity), drill screw holes, and mark out the locations of later machine cuts. The elements emerged from the milling machine complete, requiring no further finishing, drilling, or even measuring. This was a timber structure made without the aid of one the carpenters most basic tools—the pencil.

The design also employed a cunning 45-degree geometry in which the roof struture is not keyed, as is normal, to the vertical elements of the wall frames but to the diagonal braces. Consequently, many timber elements do not have a square cross-section, and the jig had also to provide for milling these non-othogonal elements.

It was designed to be flat-packed—following a test assembly in the workshop—for shipping, and then to be easily assembled on site by a team of volunteers. The timber fabrication methodology developed through the project has gone on to prove its scalability, including being used to create a struture currently being exhibited at the Venice Biennale.