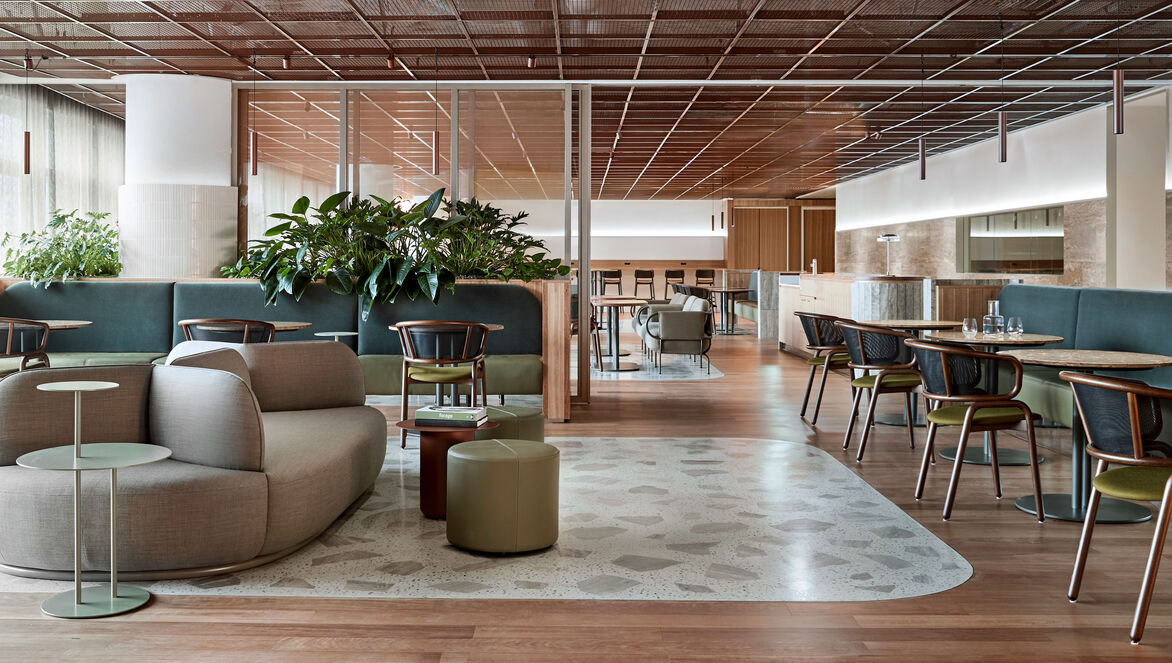 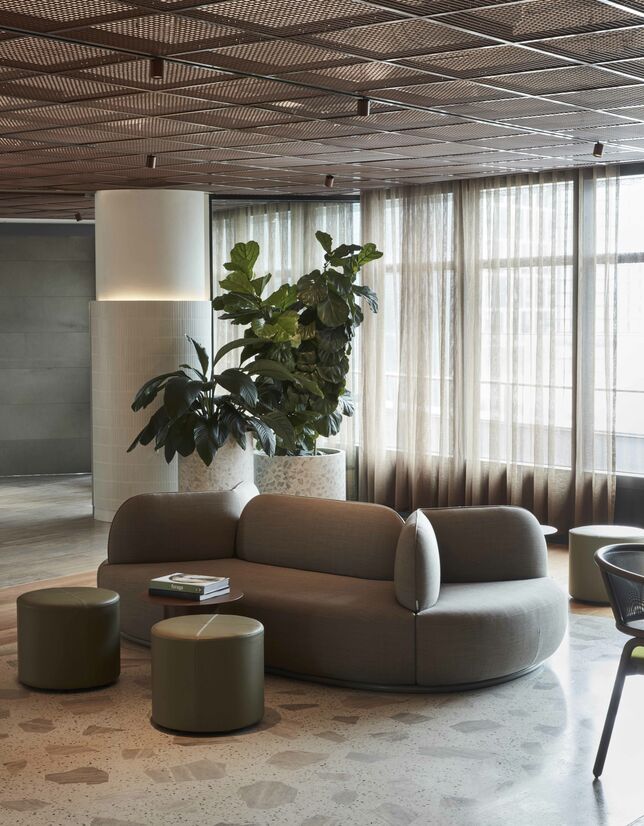 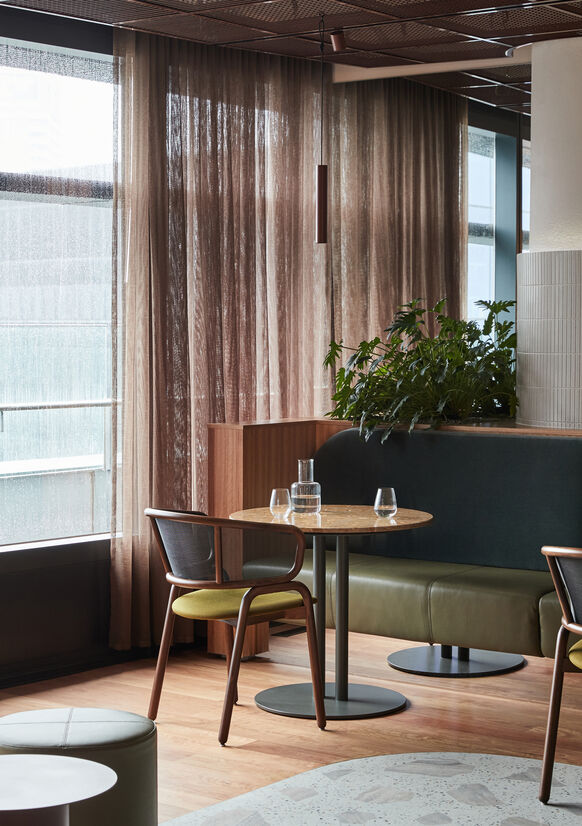 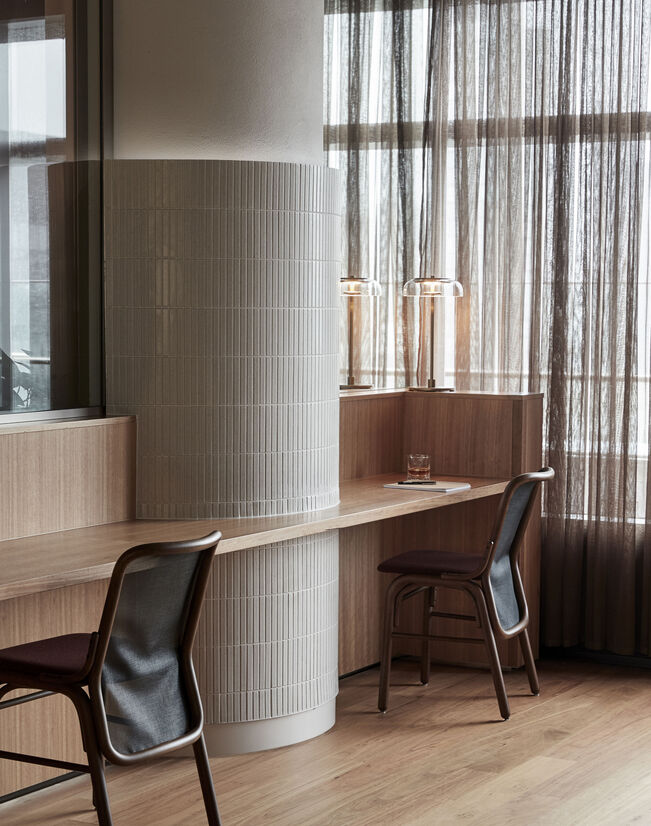 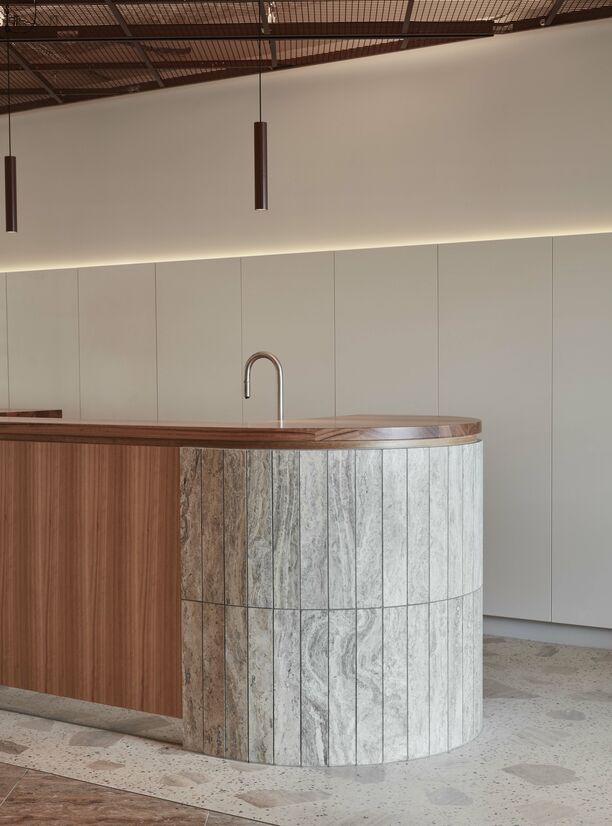 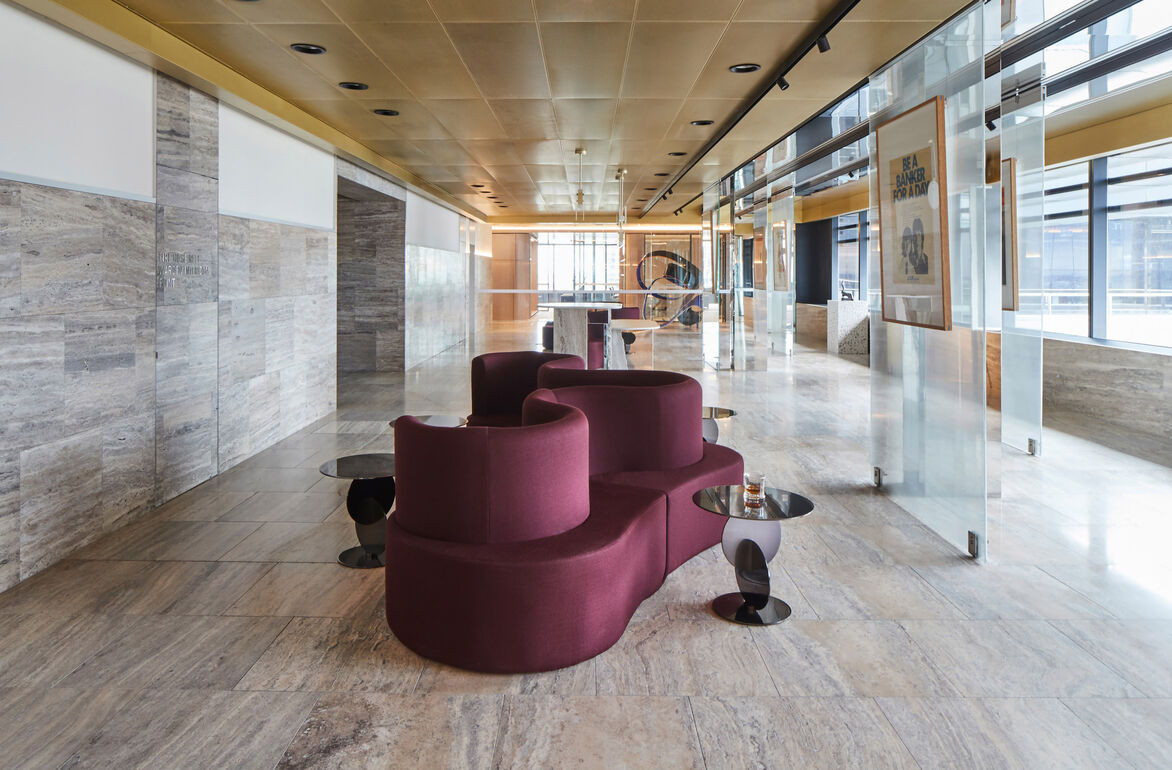 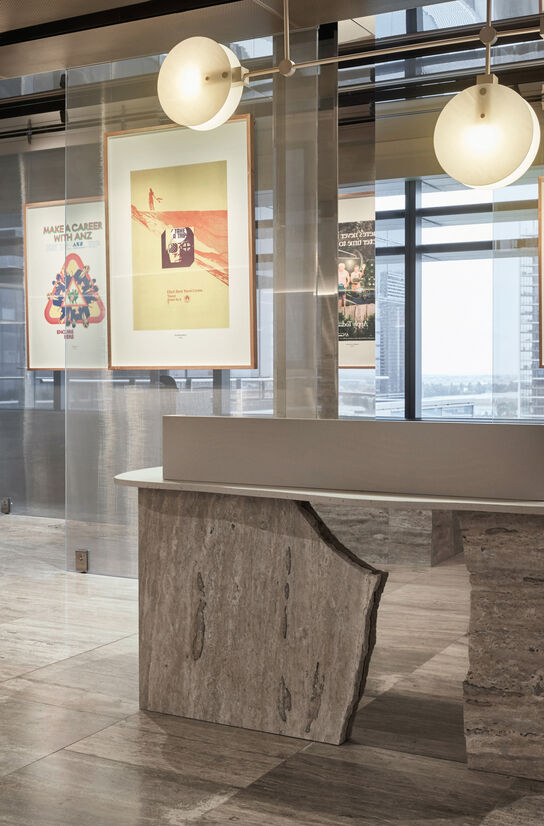 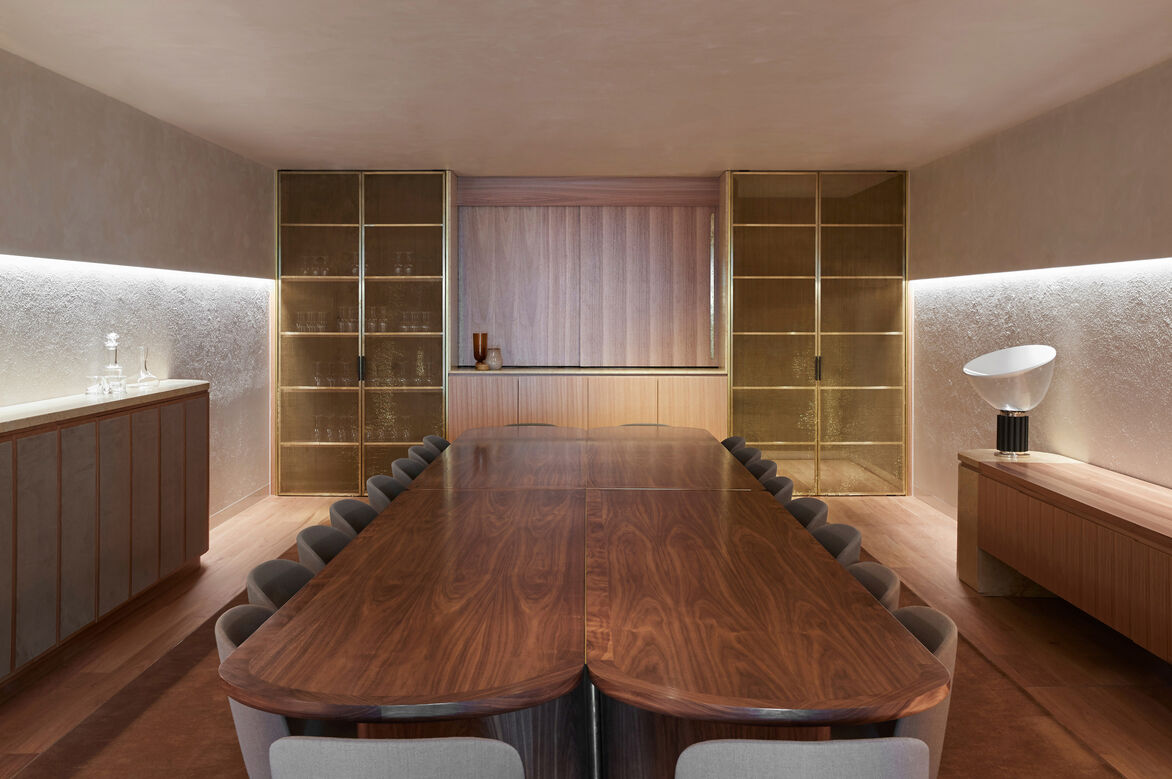 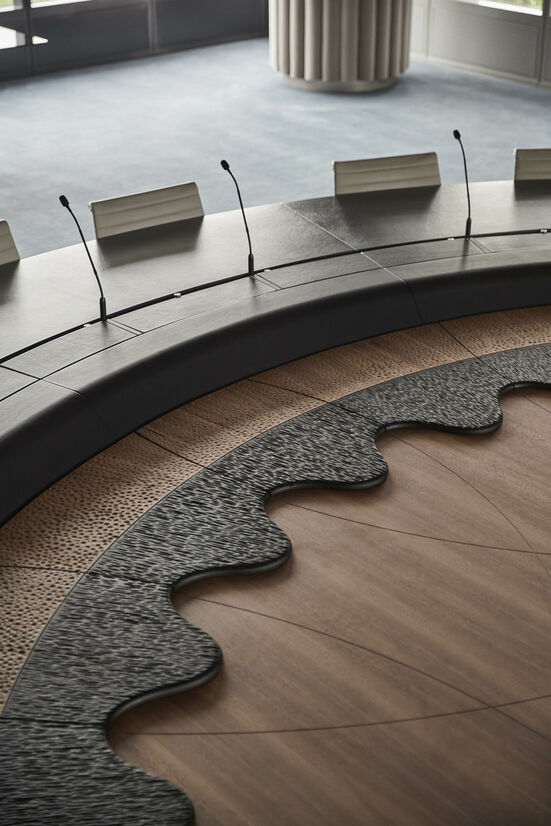 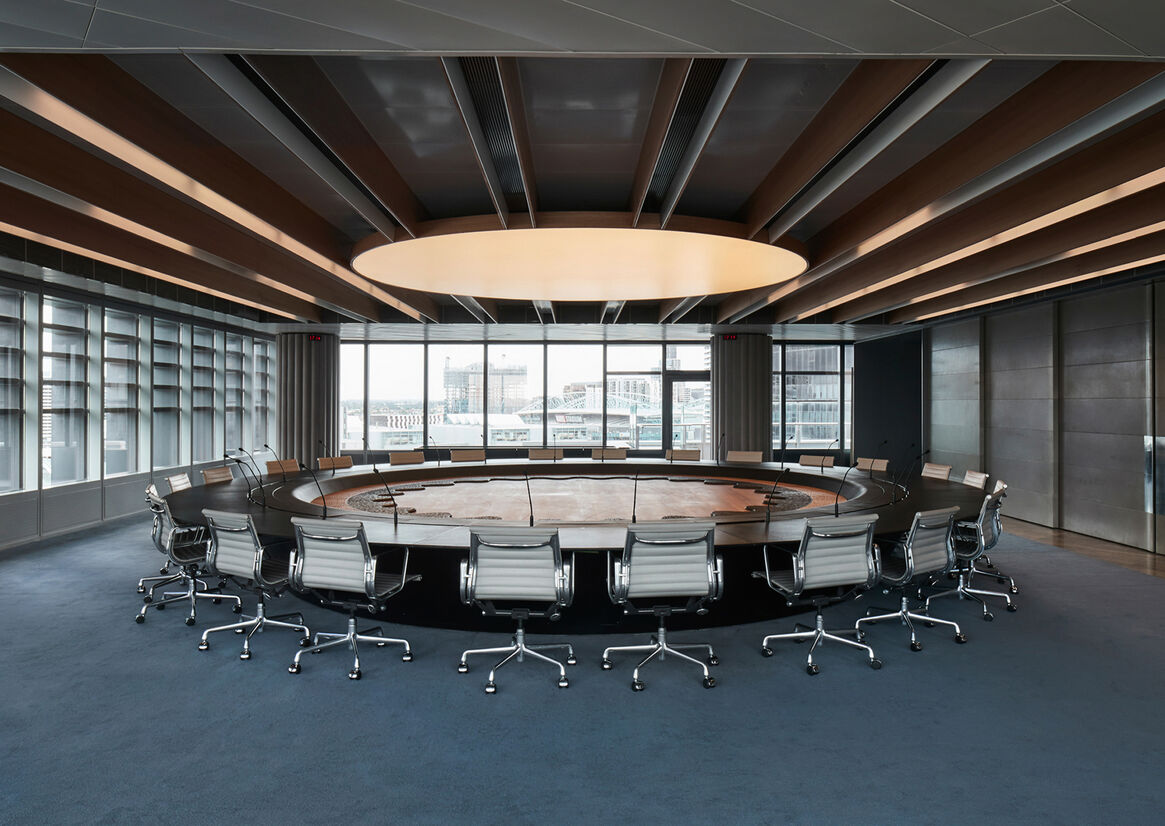 Transformed into a thriving hub of activity and interaction, ANZ Open House invites staff and clientele to collectively enjoy and co-own a set of exciting amenities across Level 10 of their Docklands HQ.

The brief presented two important goals. From a human perspective, the aim was to open up and expand communal space, and provide for core employee needs.
Functionally, the centralisation of staff and operations provided the opportunity to consolidate formerly off-site activities into one location. Our conceptual response—‘Open House’—sought to reframe pre-existing cultural and physical hierarchies to change employee perceptions of ‘office space’ through programme, ambience and design.

Transparency and openness become central pillars of the new floorplan. We removed private offices and meeting rooms from the façade perimeter to let in softened natural light. Services above the open-mesh ceiling were sprayed out and uplit, and a new datum introduced to maximise senses of height and lightness. This effect was achieved through the strategic removal of immaculate travertine tile and slab, which we repurposed in a variety of creative ways.

With sustainability principles in mind, ‘considered reuse’ became a driving force behind this project. Demolition material was reformed into sculptural reception counters, a custom Palladiano floor, and new fly ash seating plinths and planters featuring travertine aggregate. These moments function as a visual and narrative nod to the previous fitout, and prevented tonnes of unnecessary waste.

Bringing improved functionality and dual purpose into the arrival area, Foolscap has reimagined a previously formal reception zone as a vibrant, multi-use space.

At the centre of the arrivals area, sit two sculptural workpoints – consciously constructed from pieces of repurposed travertine. The travertine, salvaged during the project’s demolition phase, is fused with polished stainless steel and topped with fly ash.

Adjacent to the Reception sits the Living Rooms – a variety of agile settings which draw on tenets of residential and hospitality design to provide lounge, cafe and meeting break-out settings.

Anchoring the various zones is a custom ‘Palladiana’ inset floor. Foolscap designed this using pieces of repurposed travertine, saved from the demolished walls of the original fit-out and lovingly reused in a specially- named ‘travazzo’ finish.

Embracing the boardroom with a distinctly ‘Open House’ spirit, Foolscap has transformed this space into a welcoming, light-filled space. At its centre sits a monolithic boardroom table, set beneath a new Barrisol disc. Infusing the space with natural warmth are elements of Blackbutt timber lining the ceiling fins, with fluted velvet upholstery encasing the base build columns.

The boardroom table is an original feature of the fit-out, retained and endowed with new purpose and functionality by Australian furniture crafters, Manapan. Manapan’s first encounter with the table immediately inspired a storyline around the ‘Macassan Well’, the only source of fresh water on Milingimbi Island (situated off the coast of Australia).