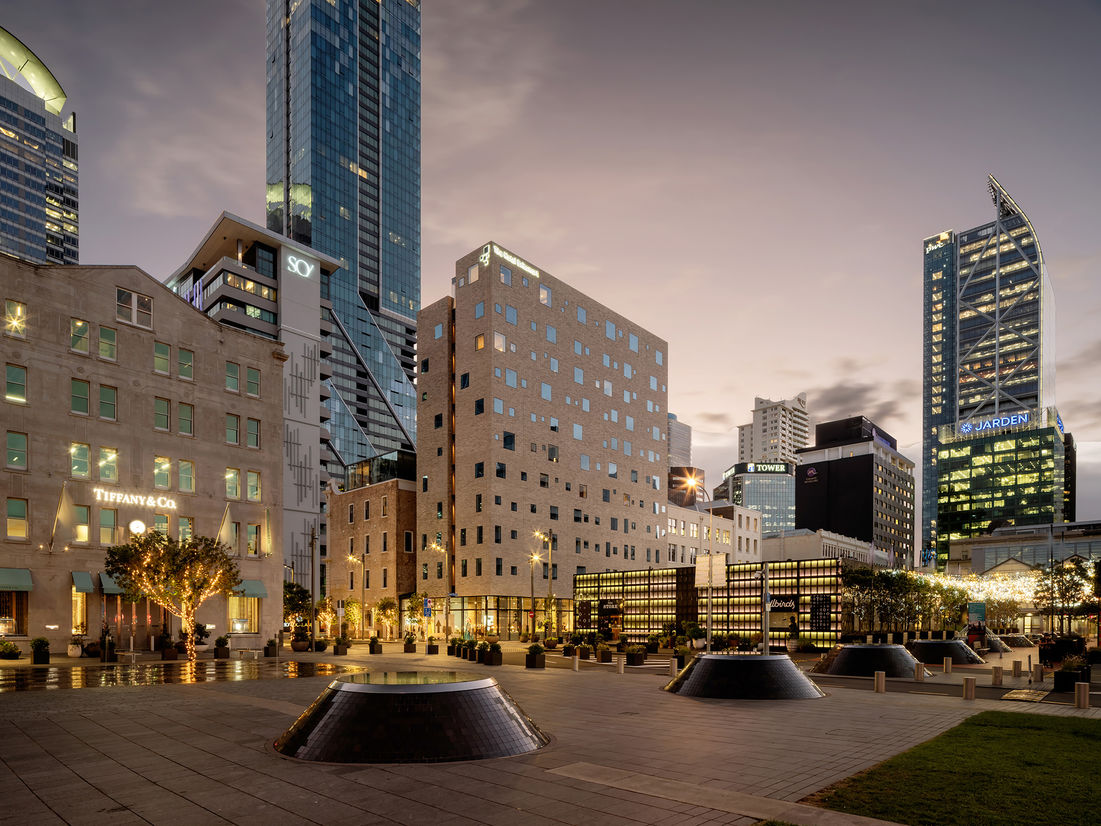 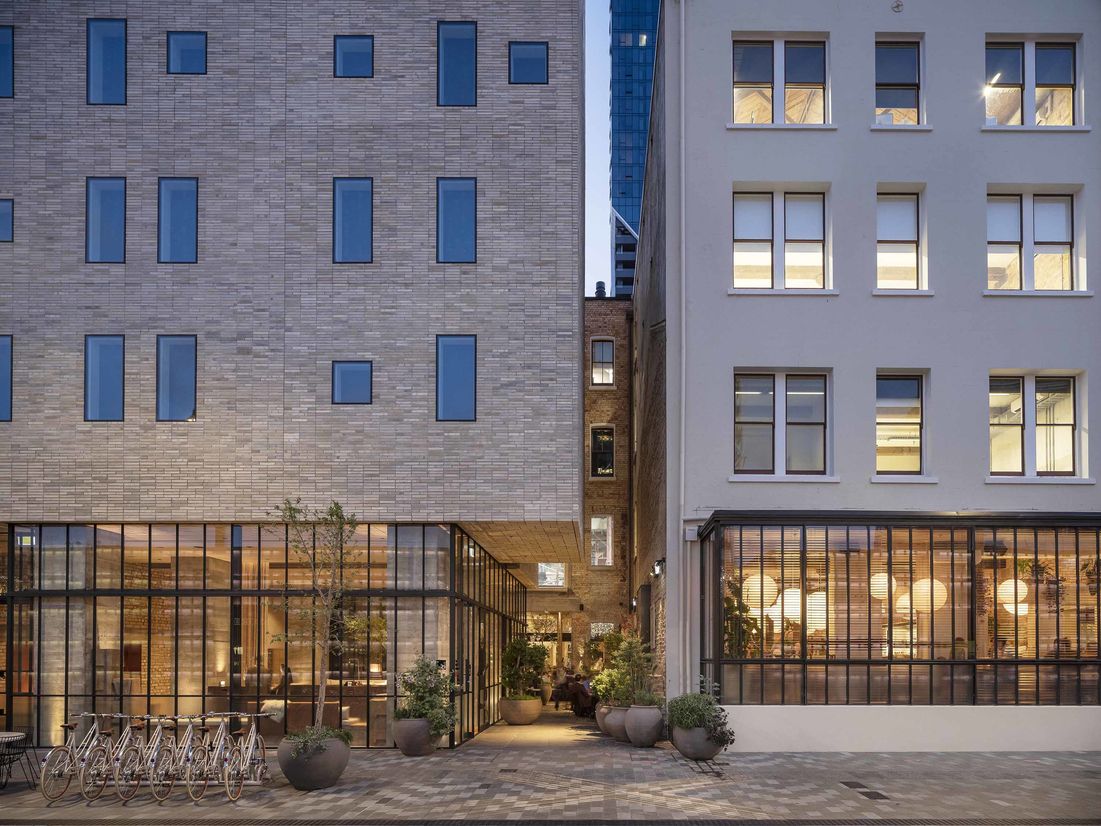 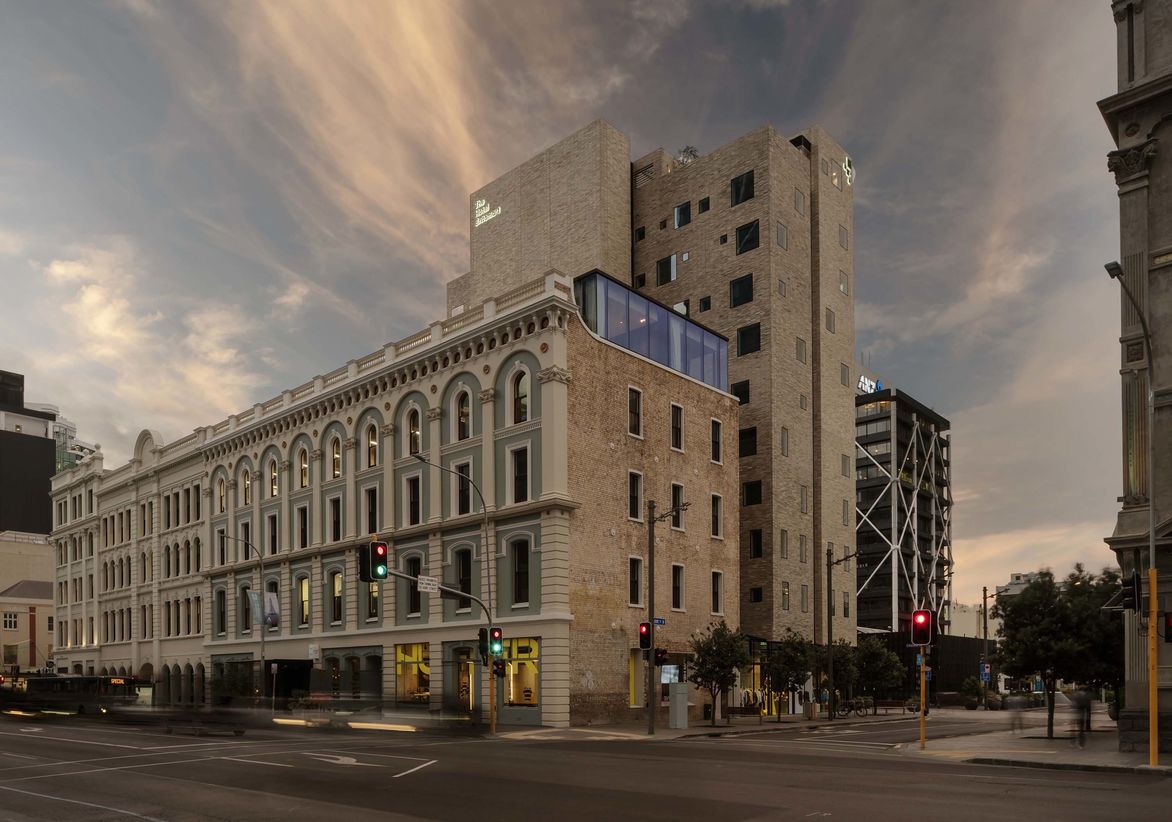 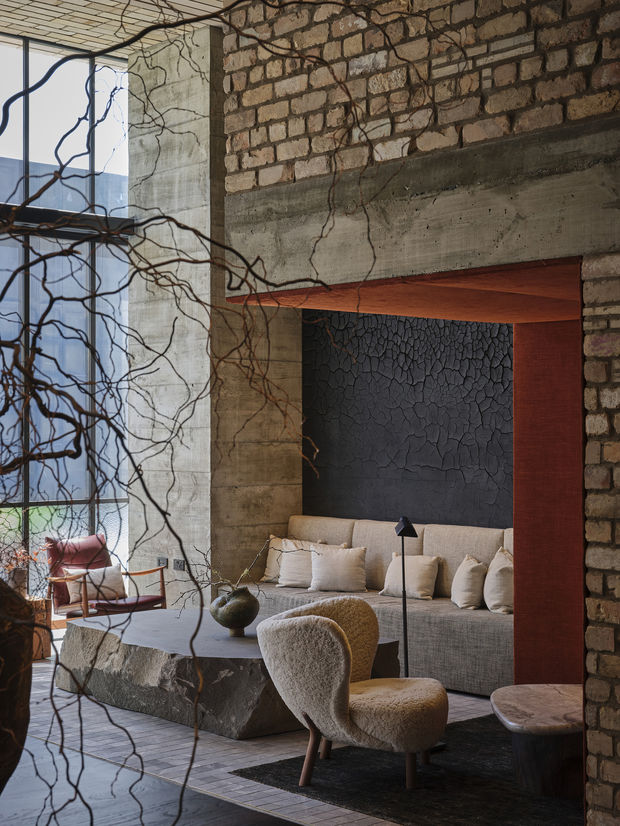 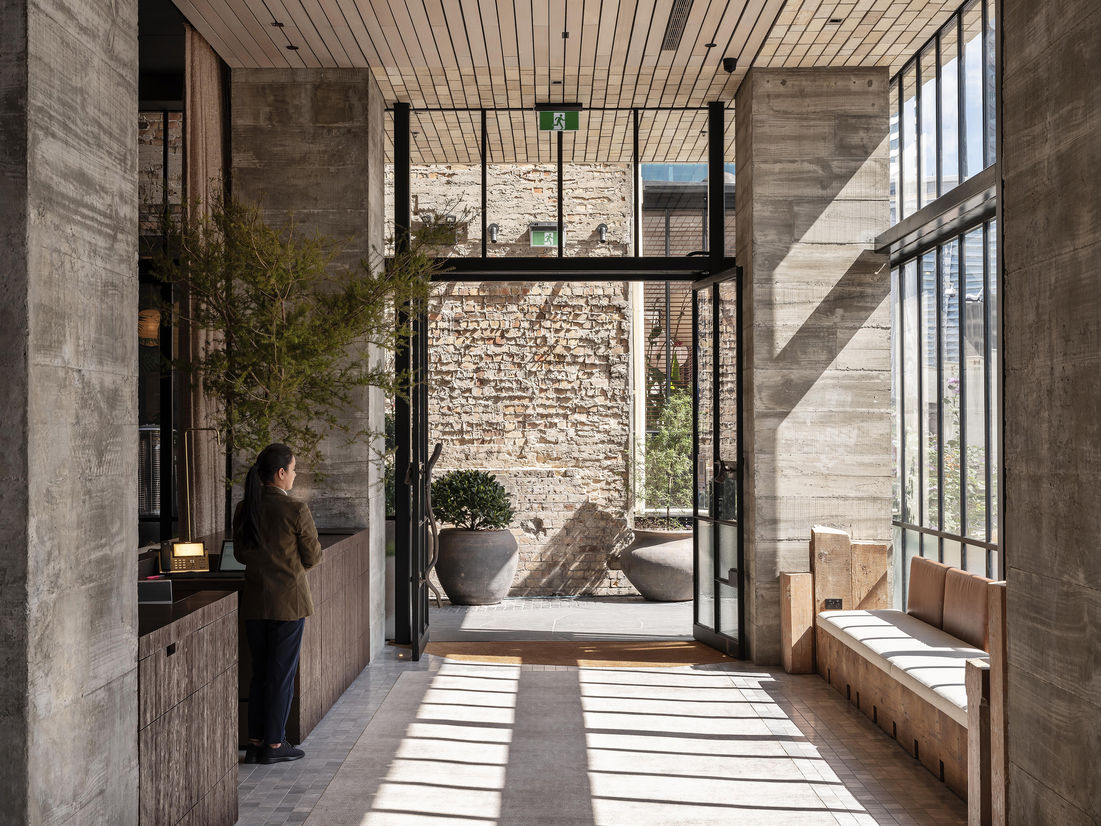 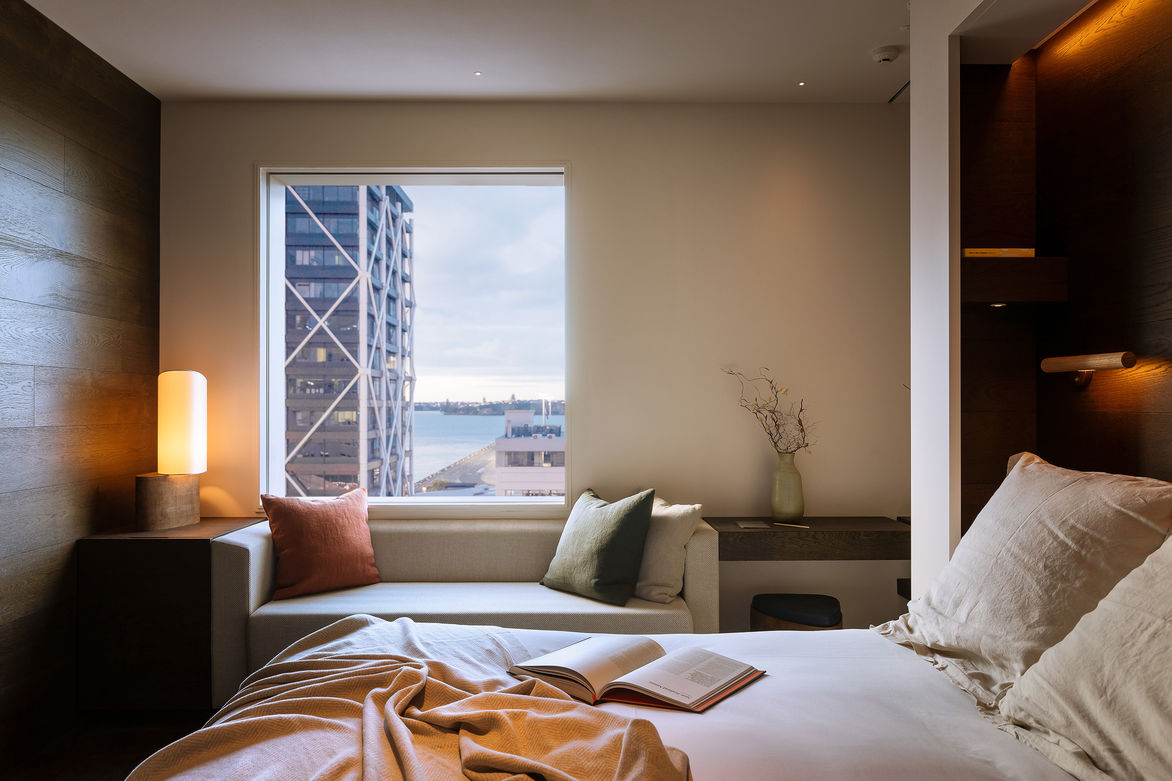 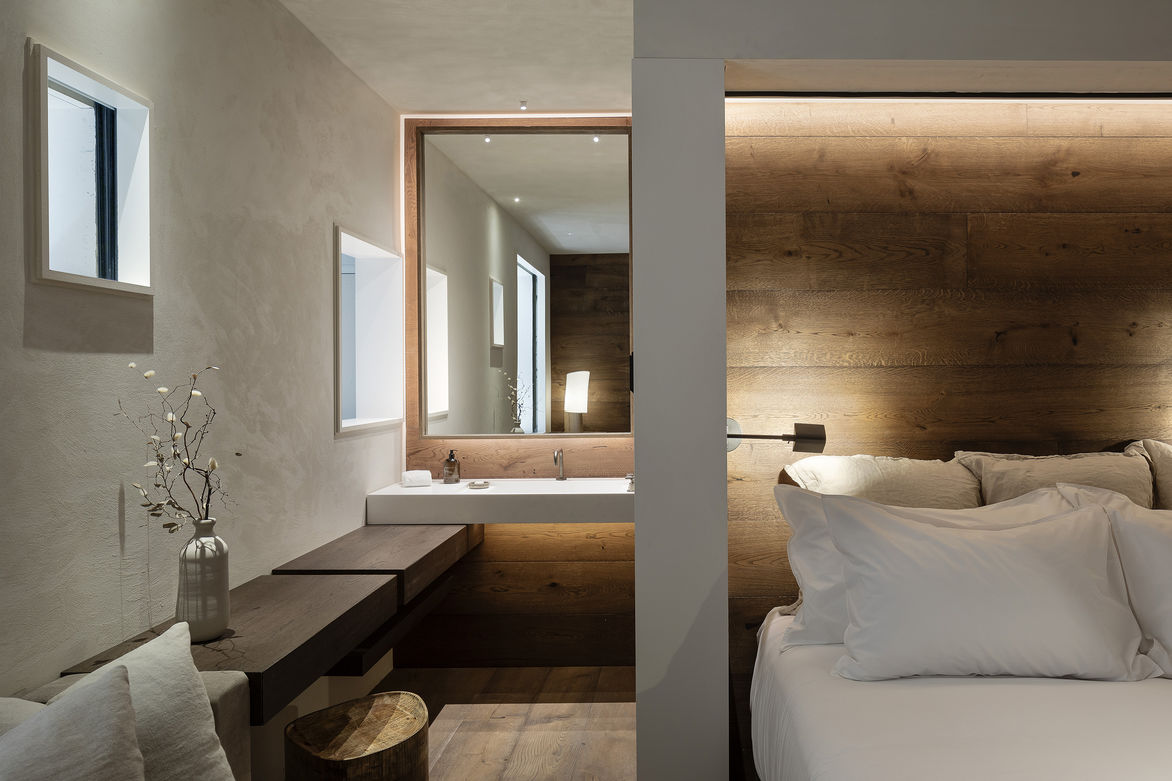 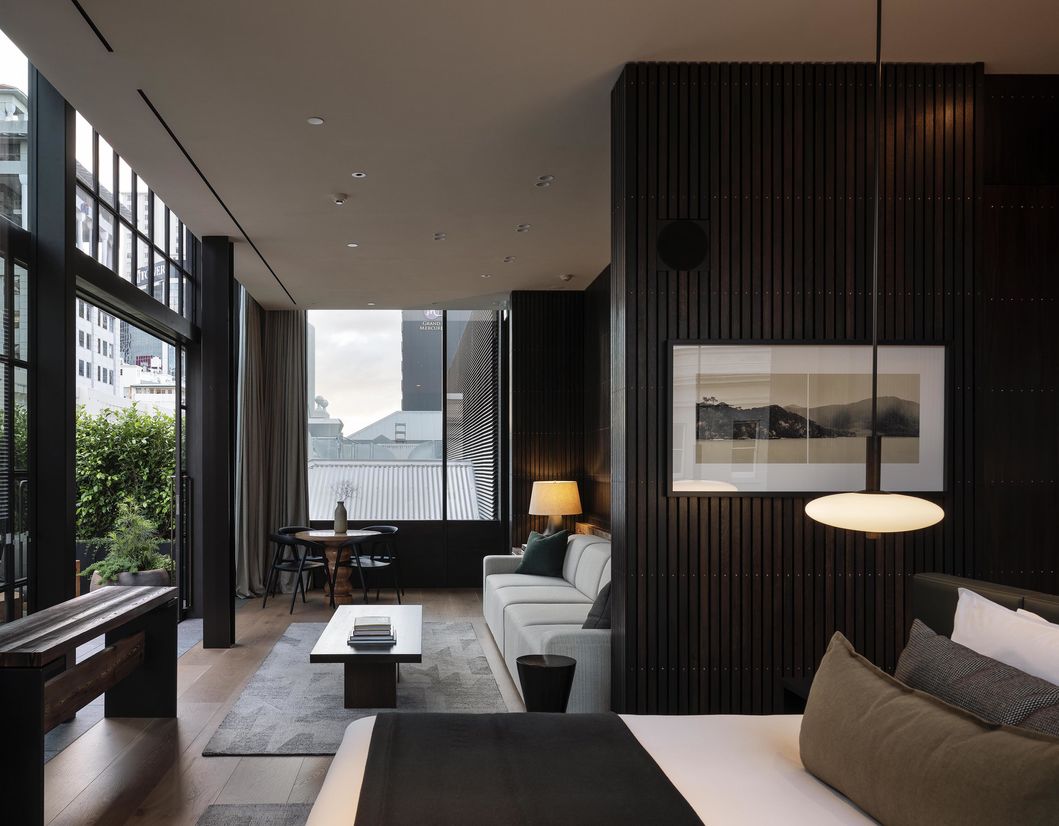 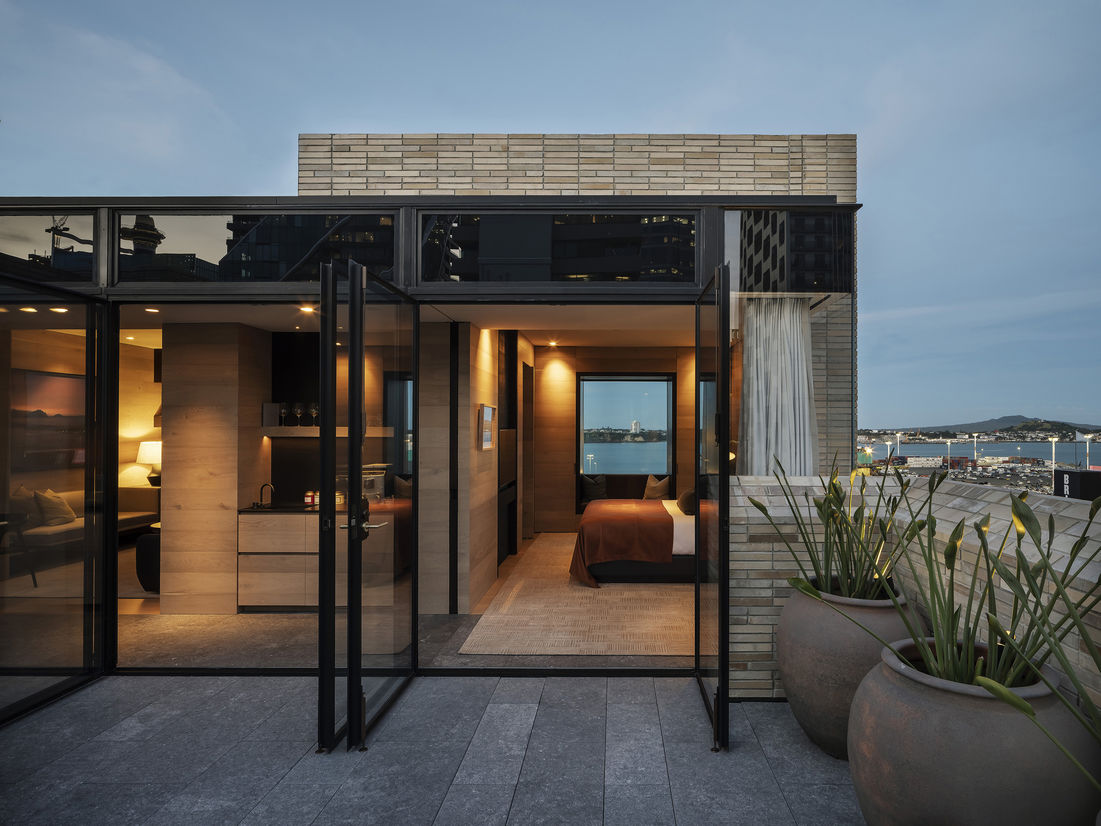 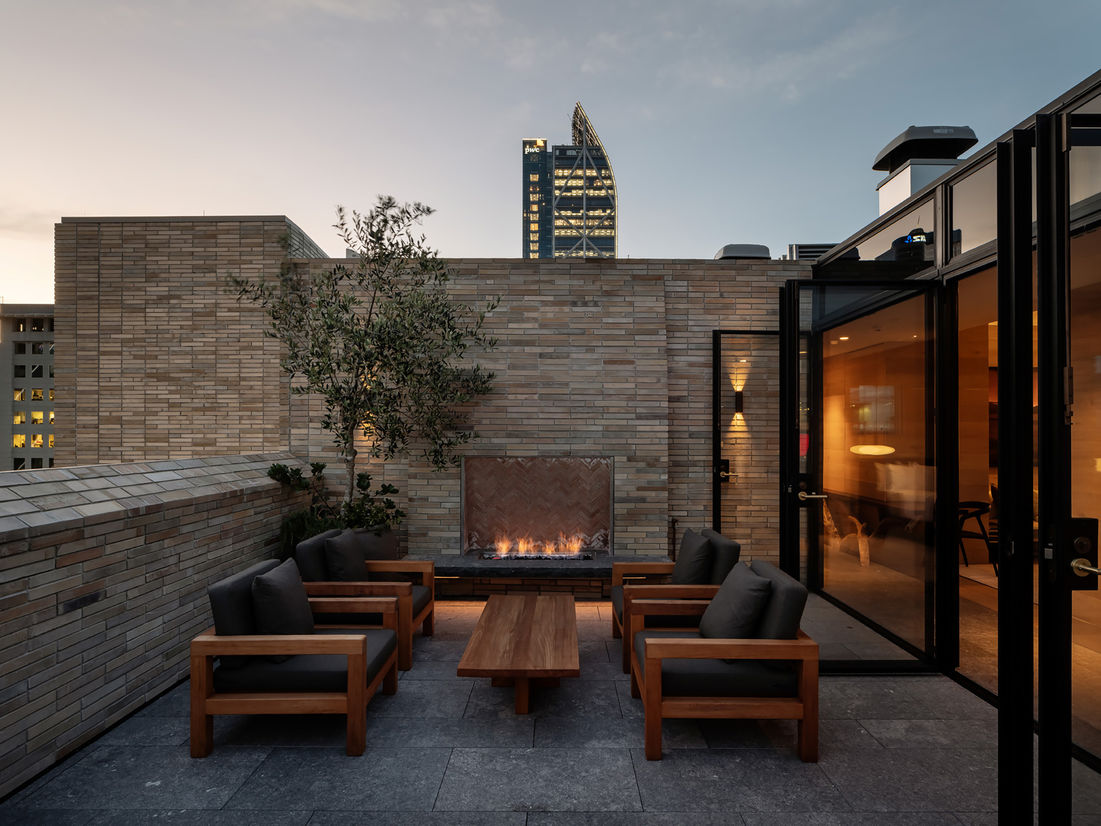 The Hotel Britomart is a 10-storey building crafted from hand-made clay bricks, its rough surface punctuated by a constellation of sleekly glazed windows, its mass appearing to hover weightlessly over an urban tapestry of cobbled lanes and dockside warehouses.

Located in downtown Auckland’s Britomart precinct, The Hotel Britomart's brief included:
- 99 guest rooms plus three penthouse Landing Suites in a new 10-storey building.
- A full refurbishment of the adjacent historic Buckland and Masonic buildings, including two new rooftop pavilion Landing suites and offices on levels 2 and 3.
- The creation of The Libraries, a series of highly crafted private function rooms.
- A repair of the Customs Street East façades of the Buckland and Masonic buildings, including reinstatement of the buildings’ heritage elements.
- A ground-floor laneway, connecting the hotel lobby with adjacent food and beverage offerings and surrounding streets.

Our design response was to create a hotel that feels as if it belongs to Aotearoa and its people, not just the guests who stay there. We dedicated ourselves to creating a deep sense of craftmanship not typically associated with contemporary buildings of this scale. The aim was for the architecture, interiors, and heritage buildings to feel seamlessly integrated into a five green-star building ecosystem (The Hotel Britomart is New Zealand’s first and only 5 Green-Star hotel, certified by the NZ Green Building Council).

As part of the design process, art was carefully curated, including a work by Shane Cotton (Ngāti Rangi, Ngāti Hine, Te Uri Taniwha) in the hotel lobby. The artwork refers to Maunga, celebrating the narrative of Kupe finding the Hokianga Harbour, and acknowledges the shared Ngāpuhi heritage of the artist and Peter Cooper (Ngāti Kahu, Ngāti Kuri, Te Aupōuri), Cooper and Company’s owner.

The ground floor laneway, named Tuawhiti, was gifted by Ngāti Whātua Ōrākei and means ‘crossing over to the other side’. It cuts through the new and old buildings, connecting two main streets. A bend in the laneway defines where old and new meet. The lobby and restaurant are ‘deconstructed’ and re-assembled, packing programmes onto either side of the garden laneway, creating a bustling urban oasis and blurring the boundary between hotel and city.

In the new hotel building, the exterior’s hand-made clay bricks relate to the brickwork of the hotel’s heritage neighbours, while flush-glazed windows were detailed and arranged as sleek, contemporary insertions in the rough-hewn clay walls. Within the brick mass, the 99 typical rooms feel like softly lit timber cabins. There are three atmospheric variations based on each room’s orientation to sun and light. The rooms are simple in geometry and humble in size. Almost everything in the rooms is custom designed by our team.

The five penthouse suites are more expansive, with private rooftop terraces enjoying the cityscape as their backdrop. The rooms feature photography commissioned from Russ Flatt (Ngāti Kahungungu) and Kieran Scott. These images sit side by side, capture The Landing from twin perspectives, interpreting the land, sea and sky through two different cultural lenses.