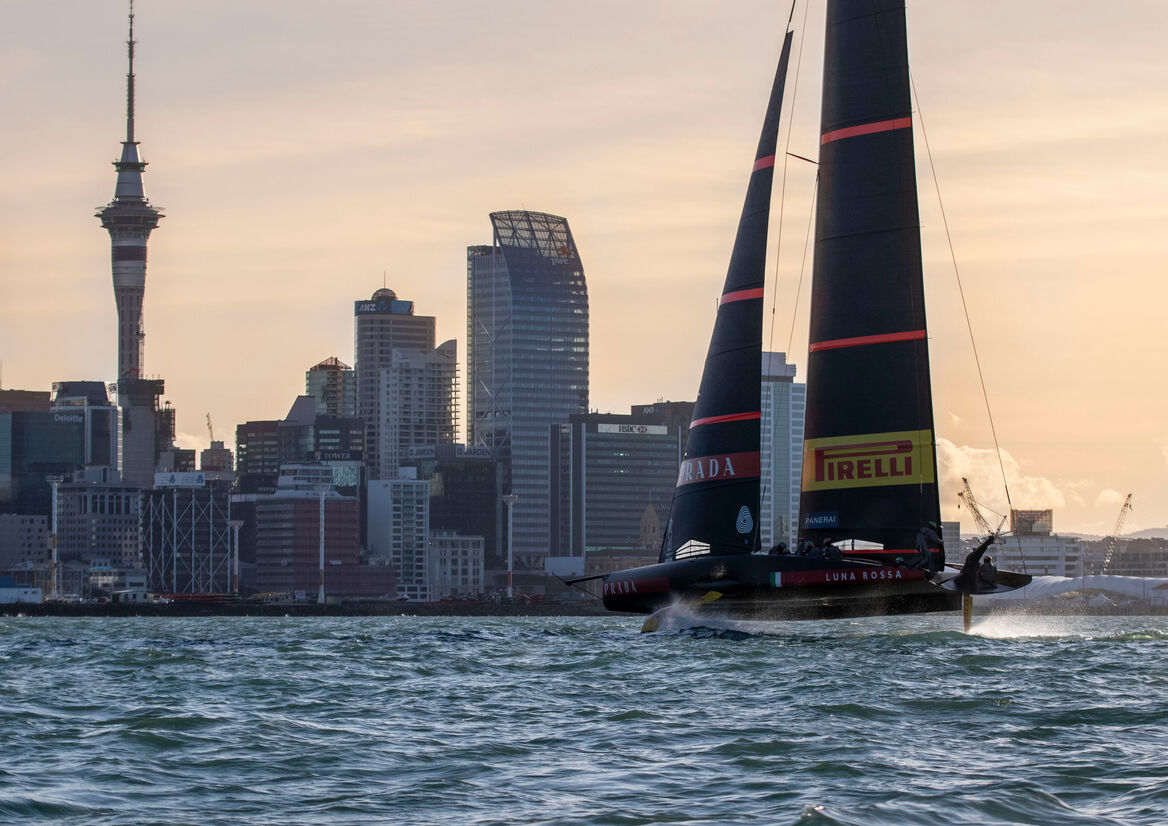 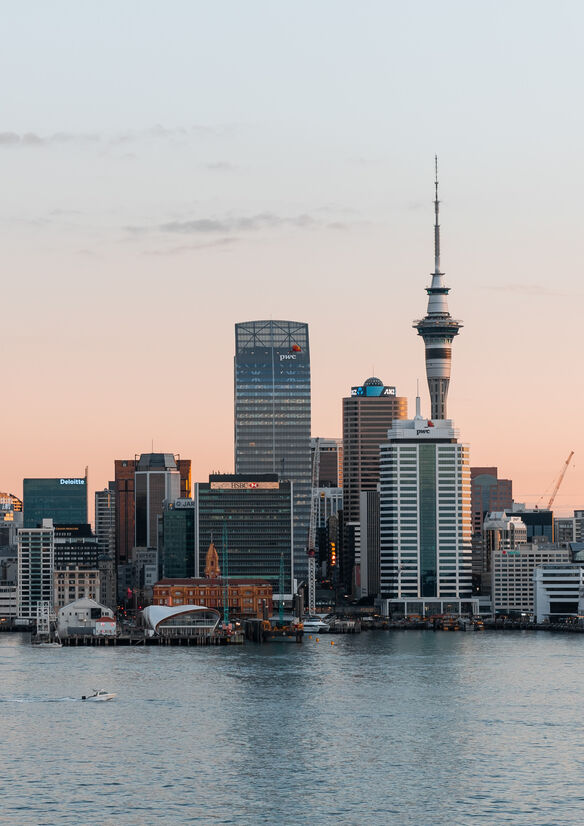 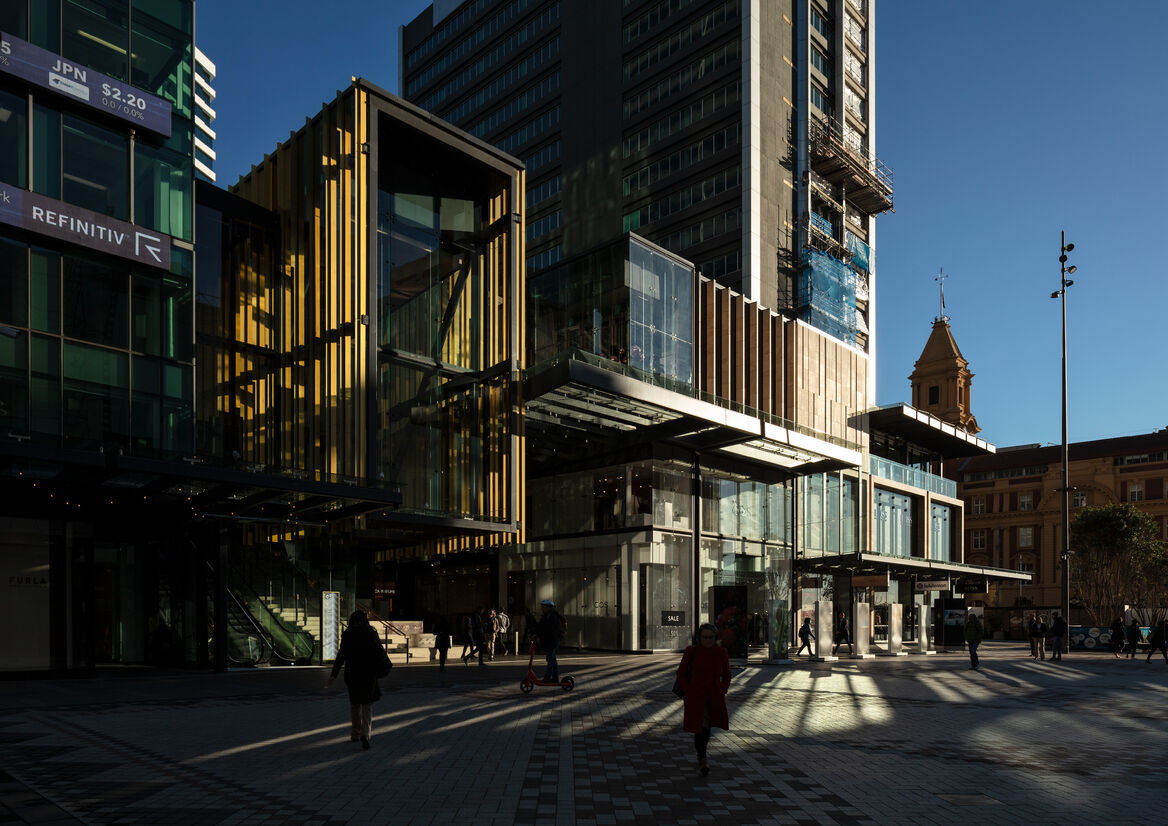 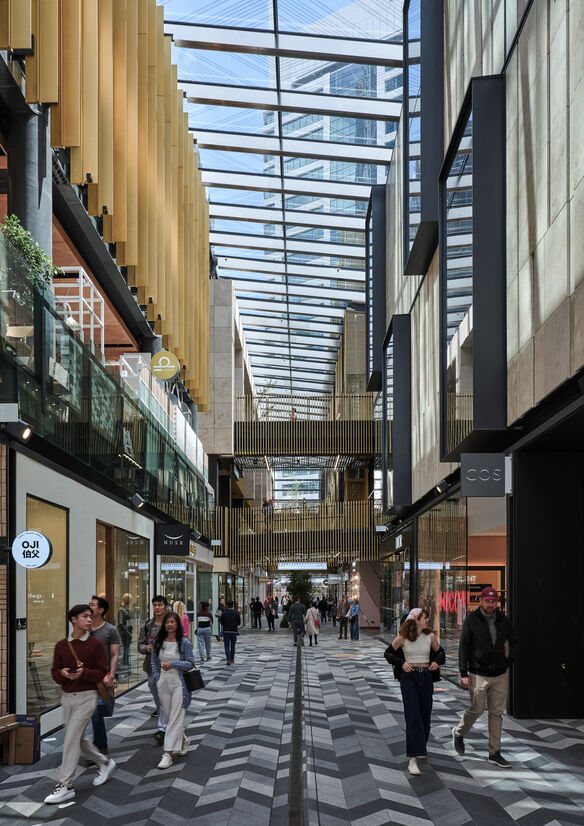 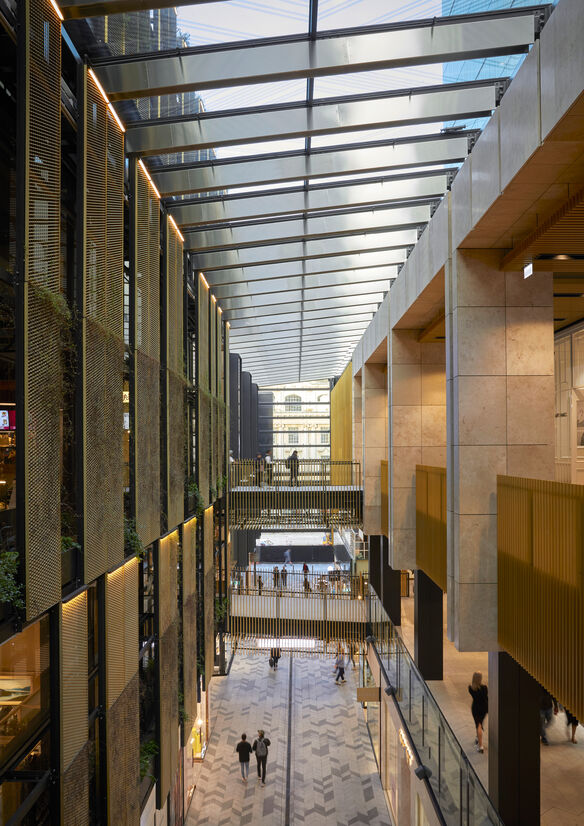 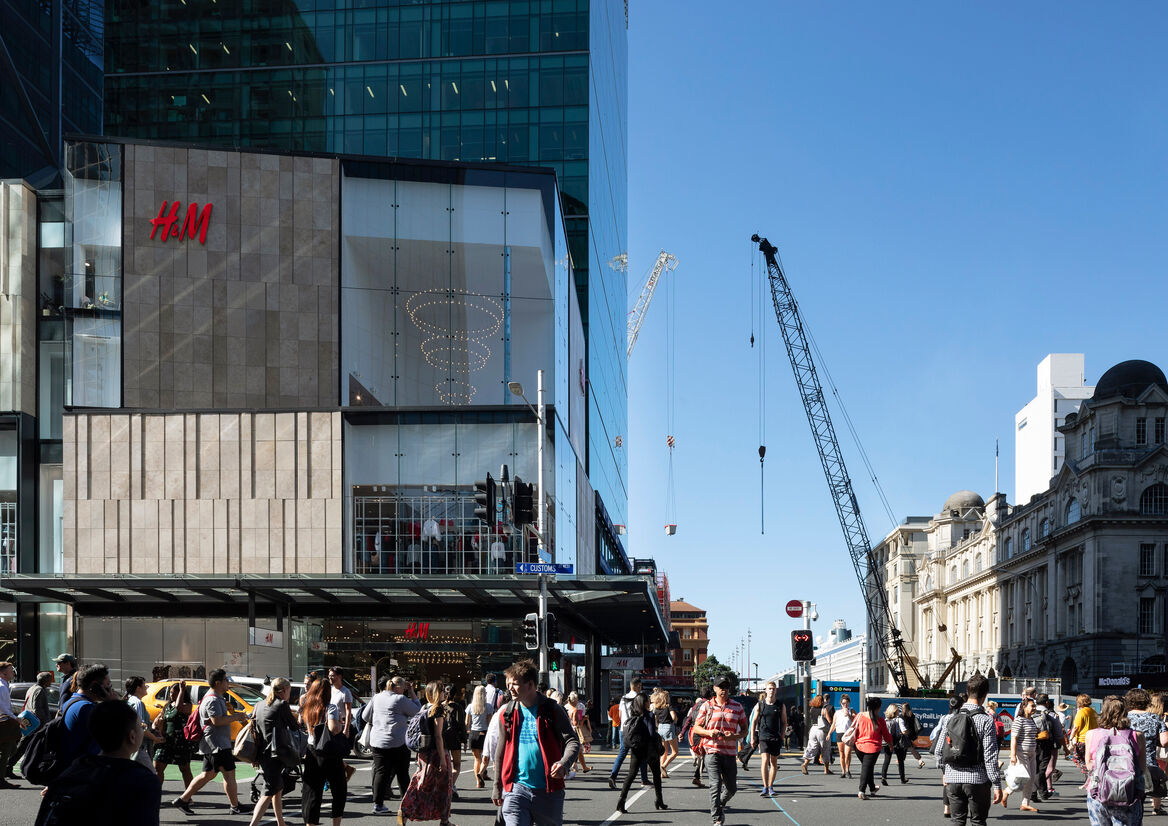 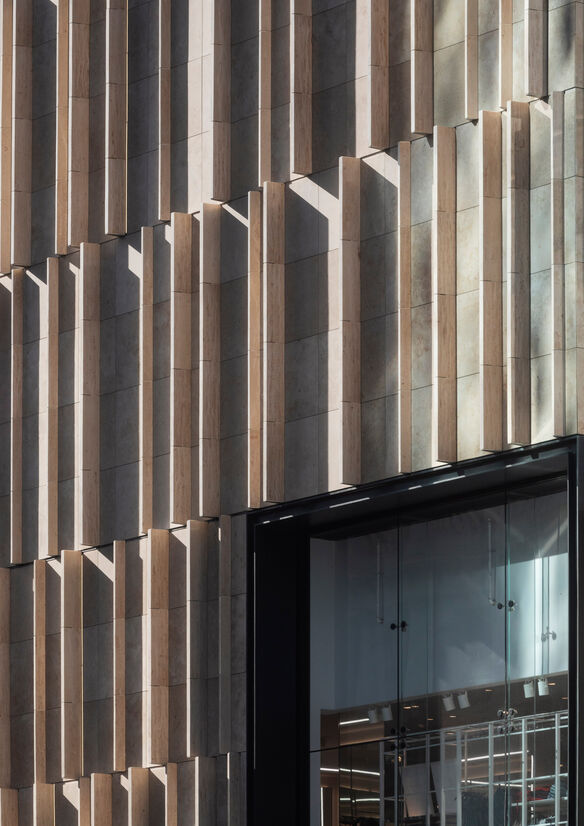 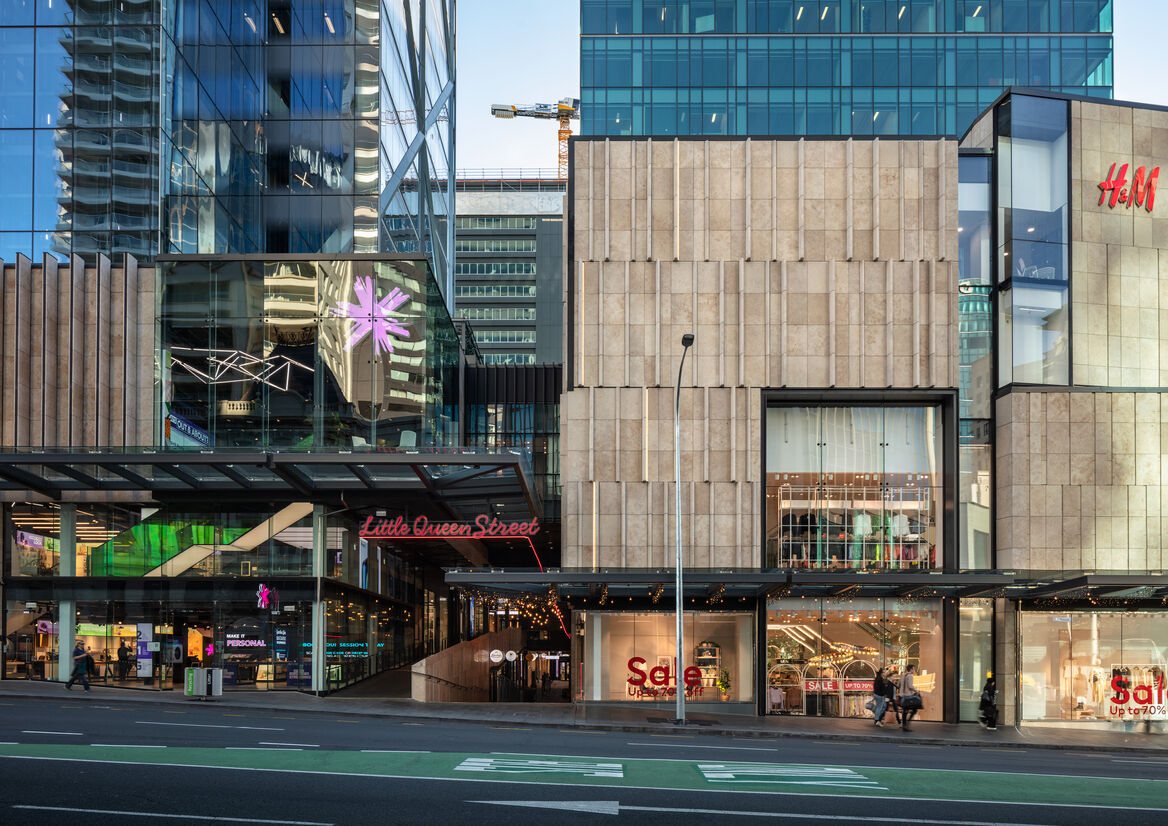 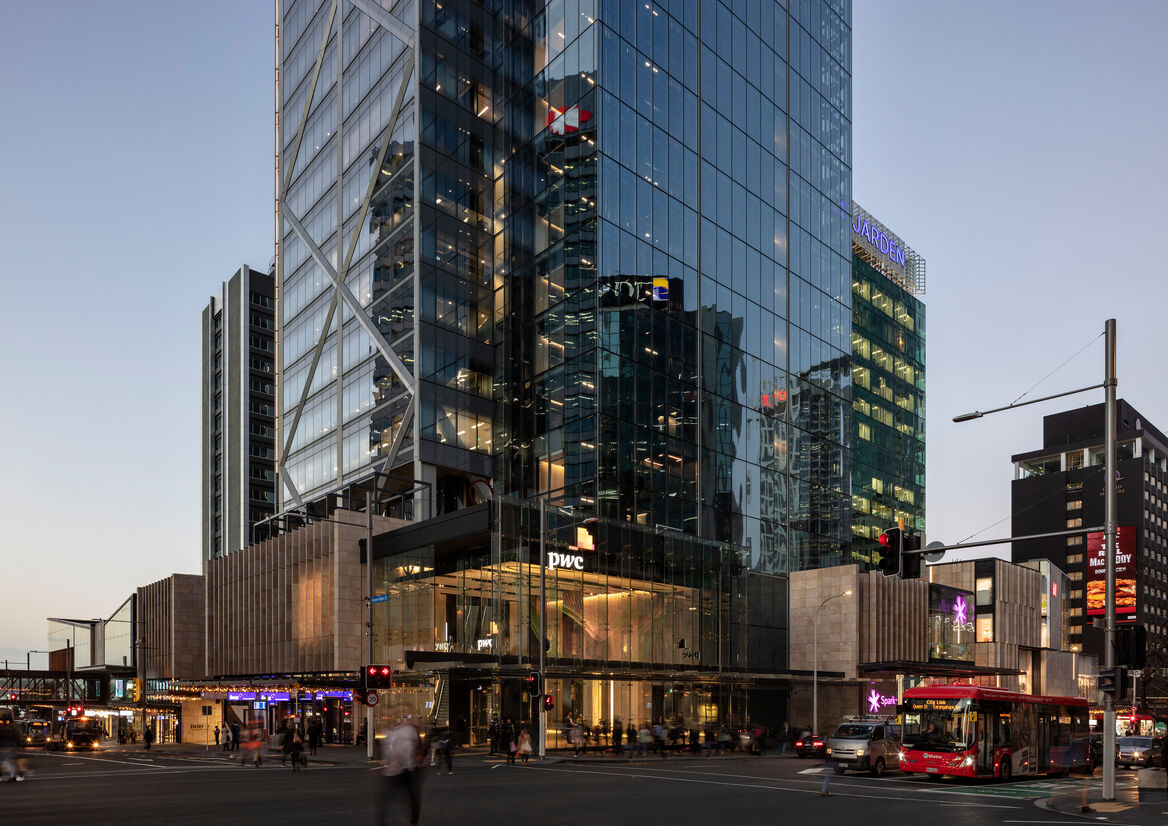 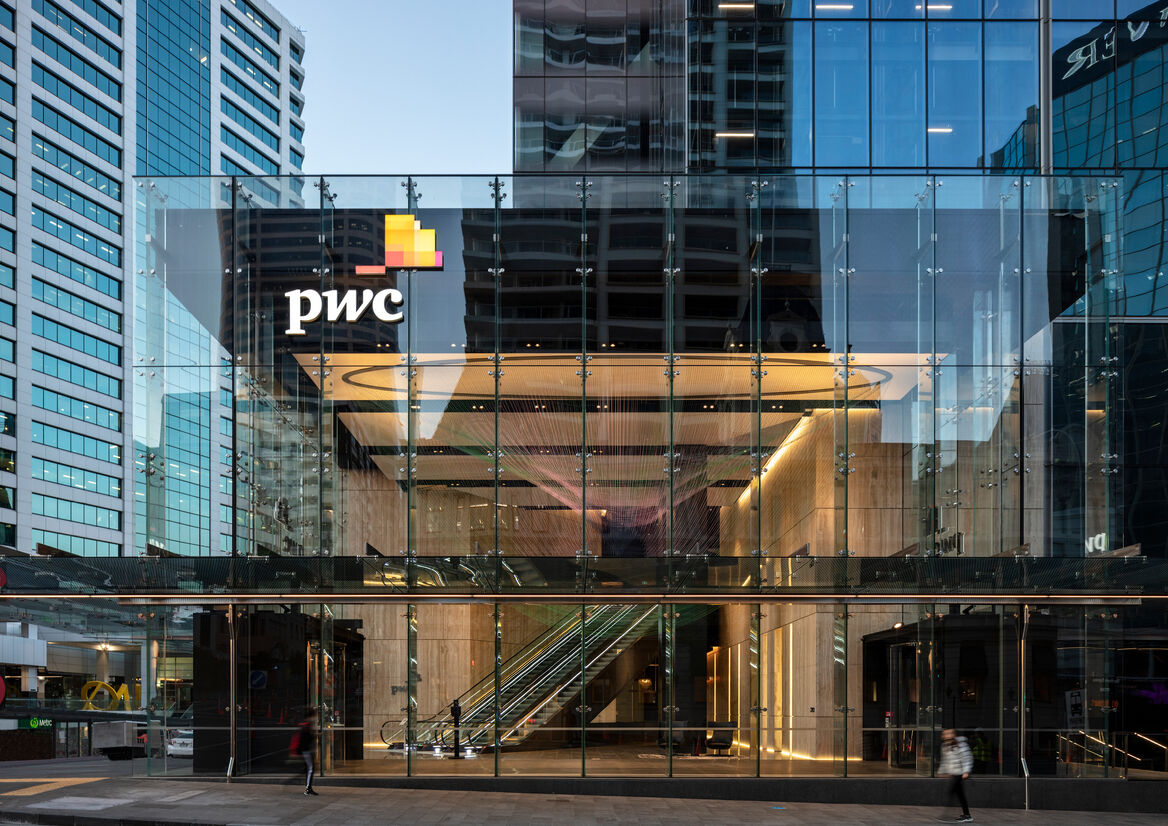 Proudly wearing Auckland’s identity as a Pacific maritime metropolis, Commercial Bay is a project that defines and influences the city far beyond the confines of the building itself.

Commercial Bay, designed by Warren and Mahoney in association with Woods Bagot and NH Architecture, occupies an entire city block, located at the foot of Auckland’s Queen Street, at the point where the historic ‘mercantile axis’ meets the emergent ‘waterfront axis’. It is a pivotal site which connects Auckland’s sense of self as a waterfront city with its history as a place of trade and connection between cultures. It sits directly over the City Rail Link and connects bus, rail, and ferry infrastructure through a series of new public lanes.

Its context exists at two scales – that of the skyline, and that of the street. Each of these contexts is vital but the primary opportunity became the urban outcome - and the way in which the project could be truly transformational for the city experience.

At the scale of the city, Commercial Bay seeks to build on Auckland’s recent ‘sense of self’ as a laneway city – creating a globally unique laneway-based retail centre that is the antithesis of the traditional inwardly focussed shopping mall. We wanted to create an open, connected, threshold-free environment where all felt welcome – turning the idea of the mall inside out. This finds form physically in the design of a series of individual buildings separated by lanes and the covered but open-air environment; but also in the retail mix where we prioritised the experience of bringing people together with food and beverage over a traditional retail anchor.

The tower (Te Toki i te Rangi) is designed as a new and distinctive skyline symbol for Auckland – its soft form on the skyline acknowledging the presence of the Waitematā, and the expressed diagrid references our Pacific origins.

We sought an outcome that was deliberately urban in its materiality – raw and tactile. We utilised a restricted palette of high-quality materials – stone, steel, concrete and glass contrasted with gold aluminium highlights. Conceptually, we sought to create a series of related but individual ‘buildings’ each with their own identity. The external materiality wraps into the lanes, reinforcing the idea of the central lane bisecting city buildings. External lighting quality creates depth, shadow, and texture; planting is extensively integrated throughout. The result is a high-quality civic experience which acts as a consistent ‘frame’ for the individual design expression of the retailers and tenants within.