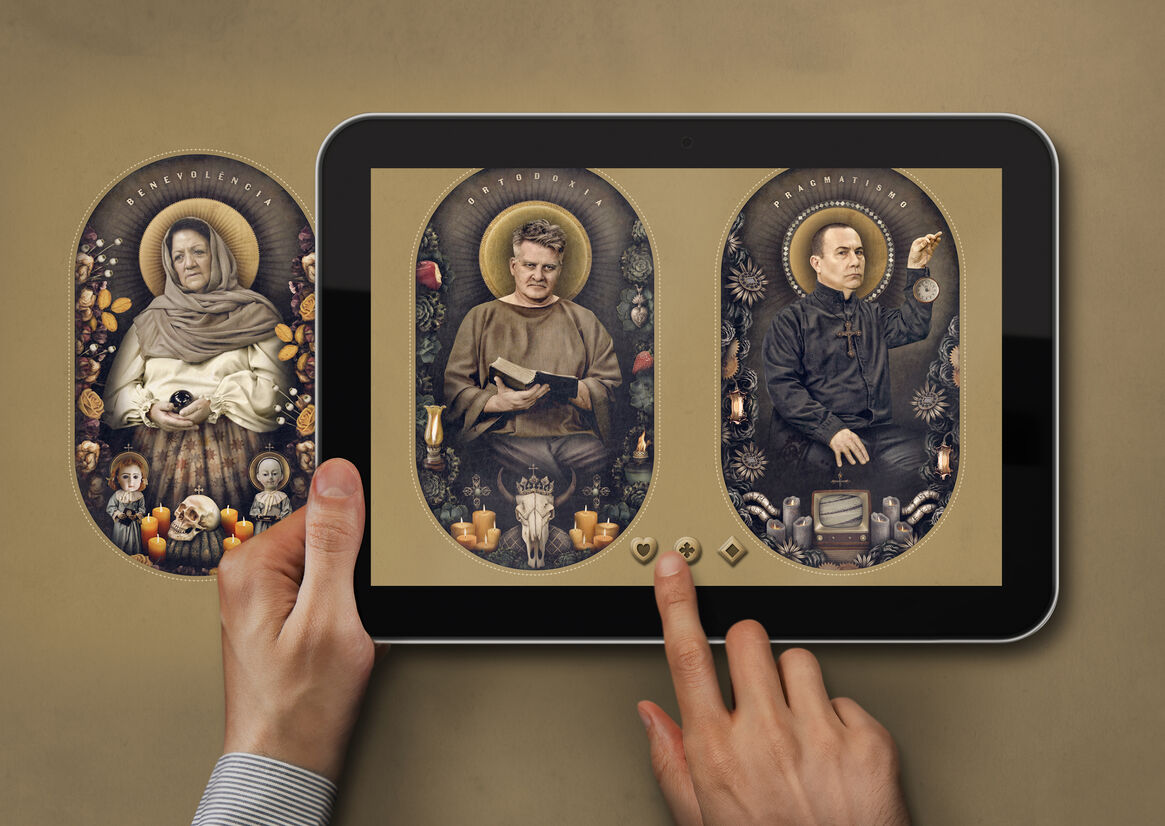 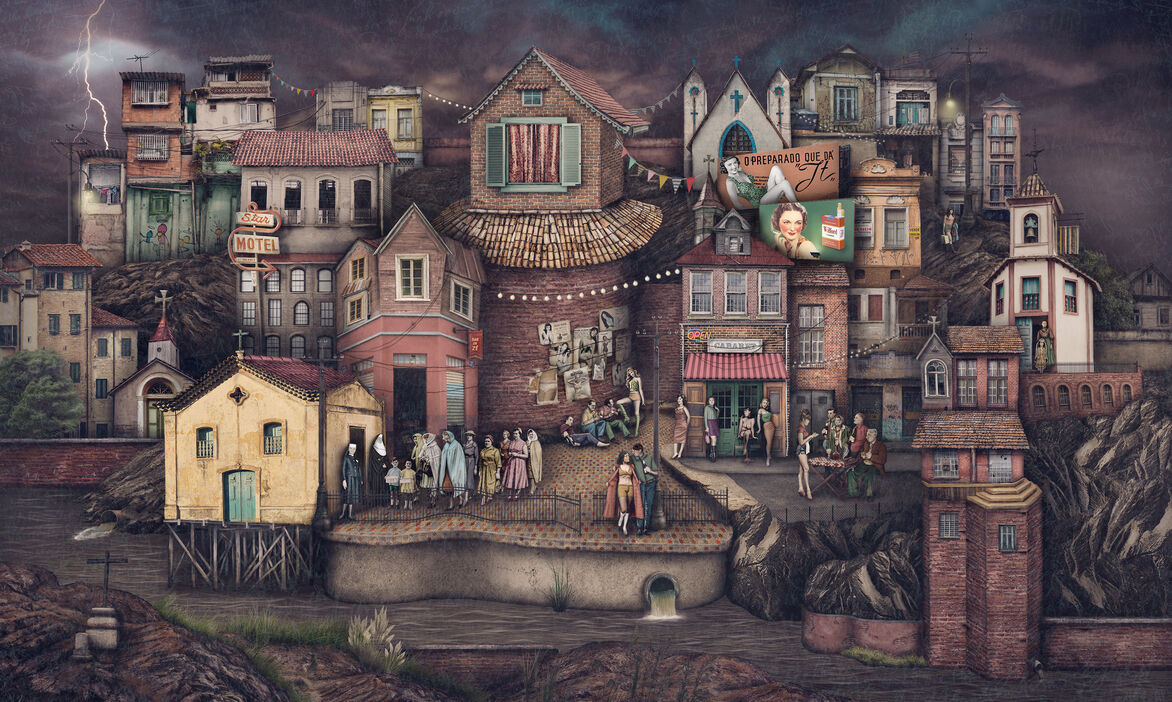 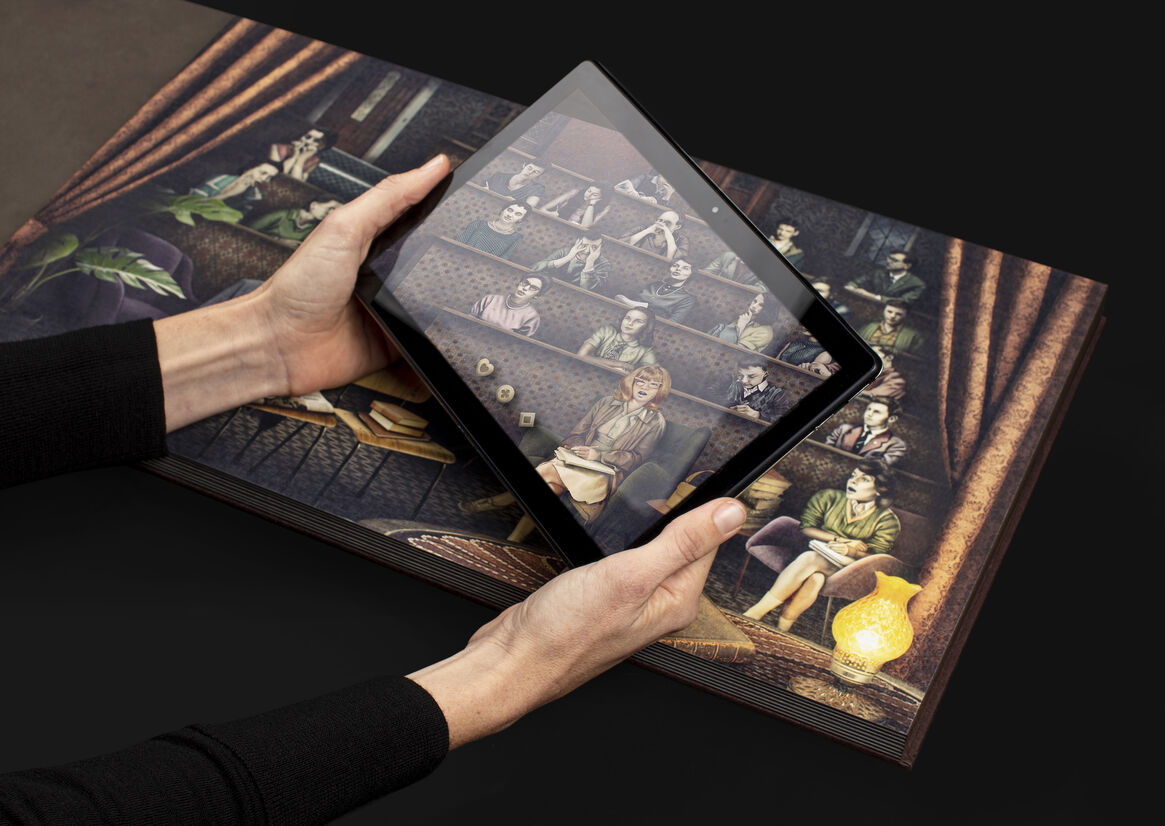 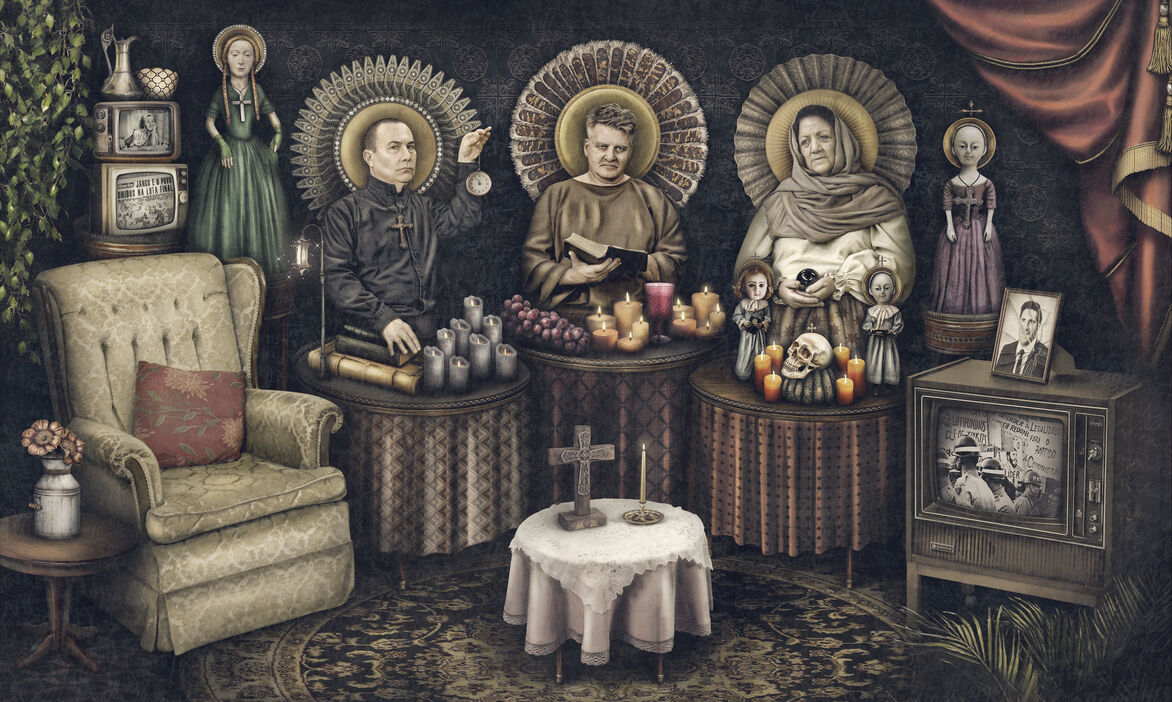 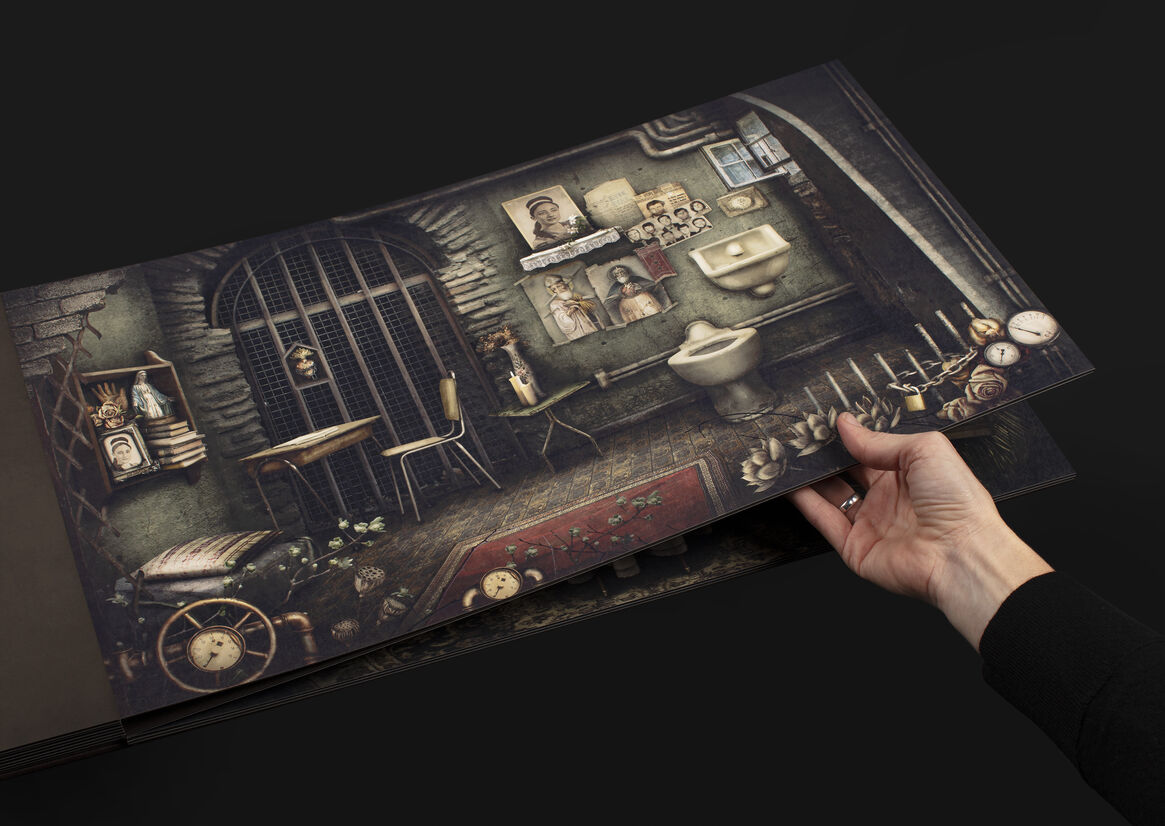 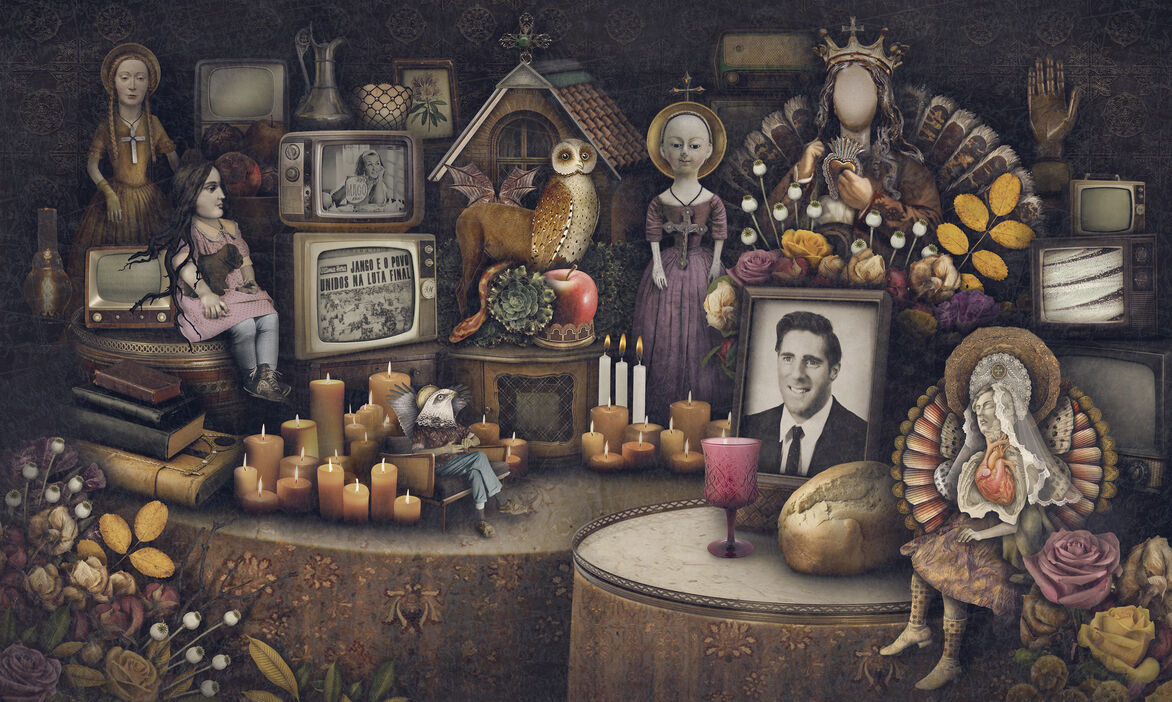 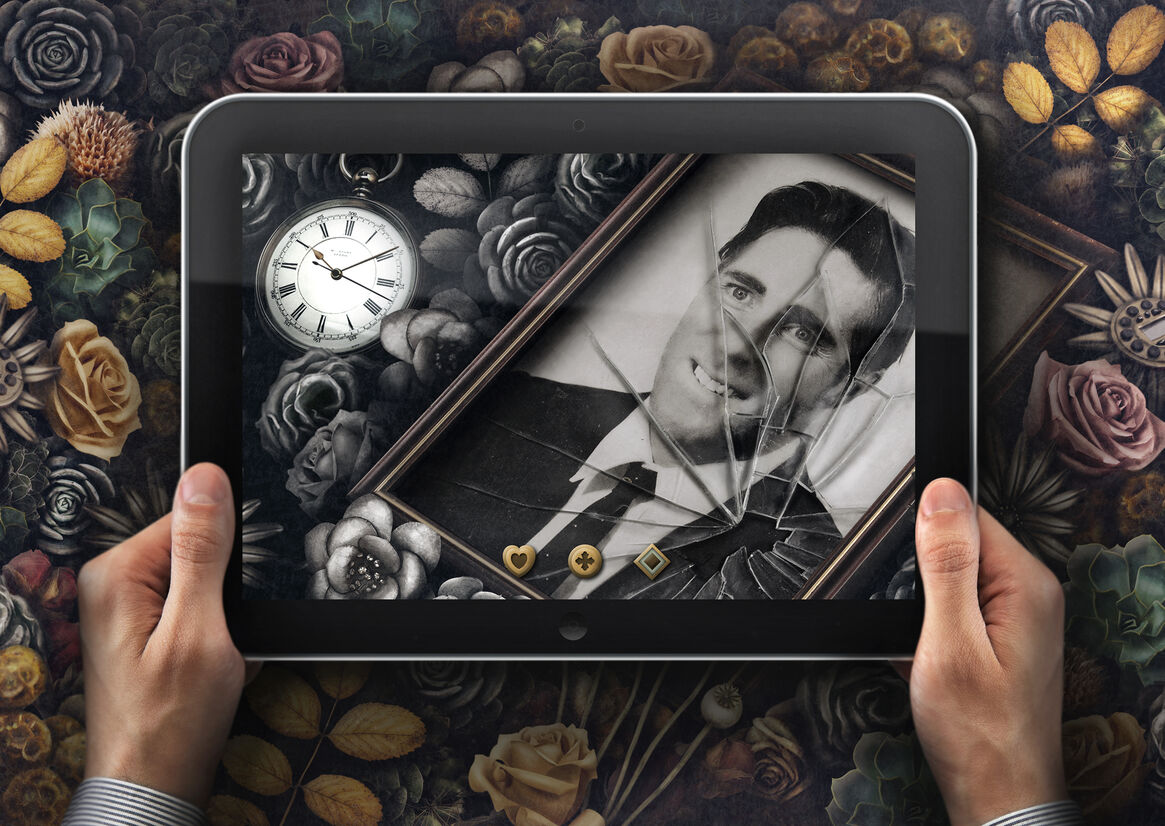 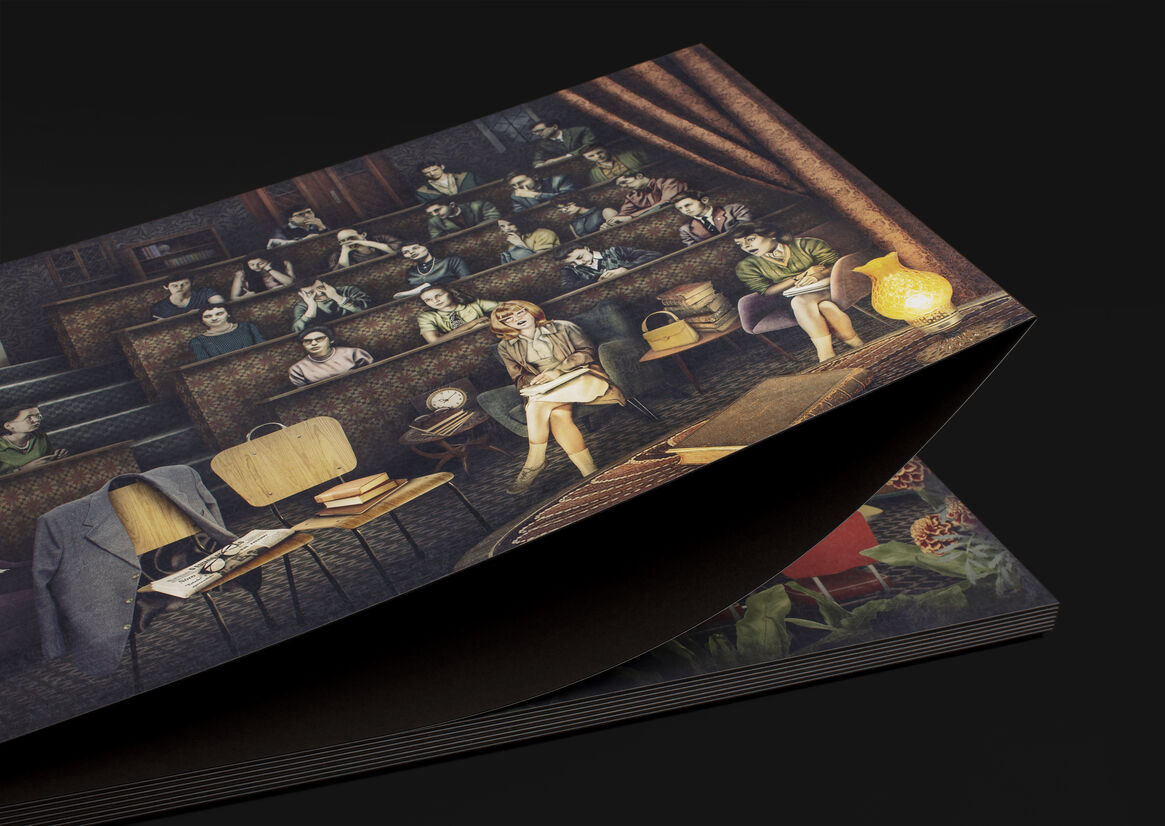 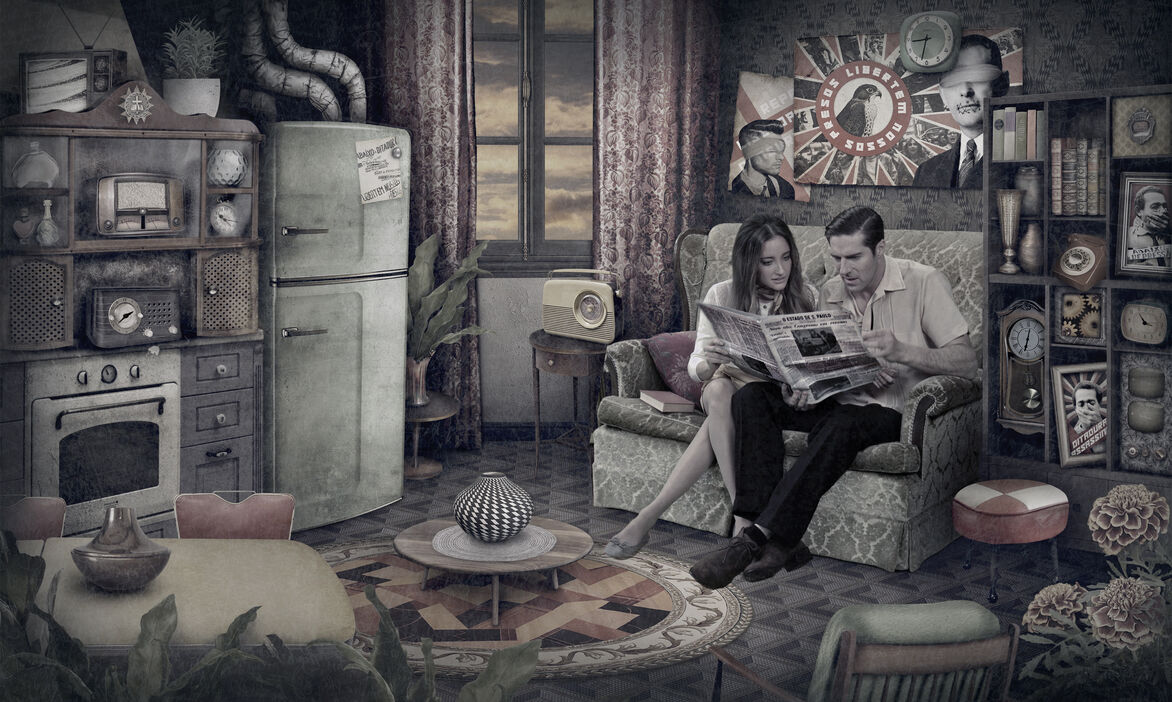 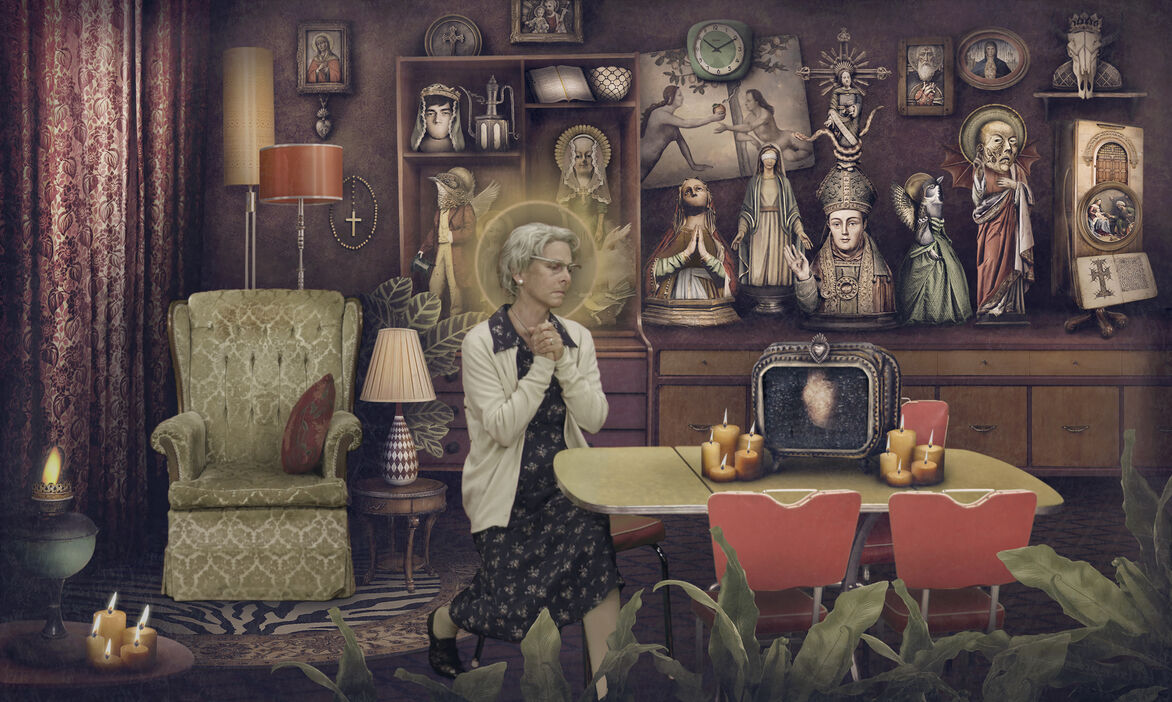 Saints of Paradox explores how narration in a picture book can be expanded through the use of Augmented Reality (AR) technology. The story concerns a woman who after 40 years in mourning at the loss of her lover in the 1964 Brazilian coup d’état, lives in a room of accumulated memories. One day when the only photograph of her lover breaks, it sets in train a series of strange events.

For each illustration, the user has the option of selecting one of three separate buttons in the tablet device, each activating a different version of the story. Three narrators (saints) present complementary but diverging interpretations of the events shaped by their different theological positions. The respective values of compassion, orthodoxy, and pragmatic realism distort details of imagery, sound, movement, and meaning. Thus, the printed image may be understood as a vacant set awaiting each saint’s interpretation of an episode in the story. When scanned, the image reviews an interactive parallax that produces a sense of three-dimensional space.

Saints of Paradox is a world that draws heavily on my past experiences. It has been informed by the magical events of my childhood, by my journeys between languages, and by my interest in the creative potentials of technology. I wrote, illustrated, and worked collaboratively on the sound design and technical AR features of the work. I sought to give a distinctive voice to Brazilian culture as I experienced it in my youth.

Conceptually, the story navigates relationships between the real and the imagined. Here, the dynamics of the magically real are normalised, and meaning negotiates an unreliable, sometimes paradoxical pathway between rational and irrational accounting and polyvocal narration. In the work, religious syncretism operates as a reference to Brazilian culture, and as an artistic and narrative device used to communicate a negotiation of different voices and points of view. Exotic forms of syncretic religion specific to Brazil describe a world of ‘realismo maravilhoso’, a Latin American form of magical realism. The strange and somehow congruous forms of European, African, and indigenous influences merge to form the collaged world of the novel. AR animated vignettes, each backed by a uniquely composed cinematic soundscape, allow characters to populate the luxuriously illustrated world. Candles flicker and burn, snakes curl through breathing flowerbeds, and rooms furnished with the contents of accumulated memories pulsate with movement and mystery.

In 1997, the Nigerian poet Ben Okri said “It is in the creation of a story, the lifting of a story into the realms of art - it is in this, that the higher realms of creativity reside.” Perhaps he was speaking here of something culturally beautiful, something beyond entertainment, that might touch the human condition, both through the intricacy of its structure and the uniqueness of its aesthetic. Saints of Paradox is a uniquely designed, new form of illustrated novel, that attempts to do this.