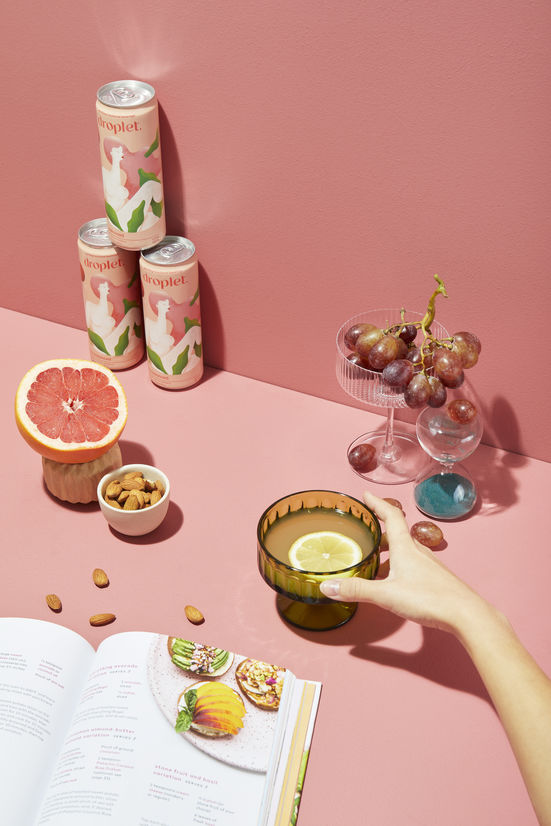 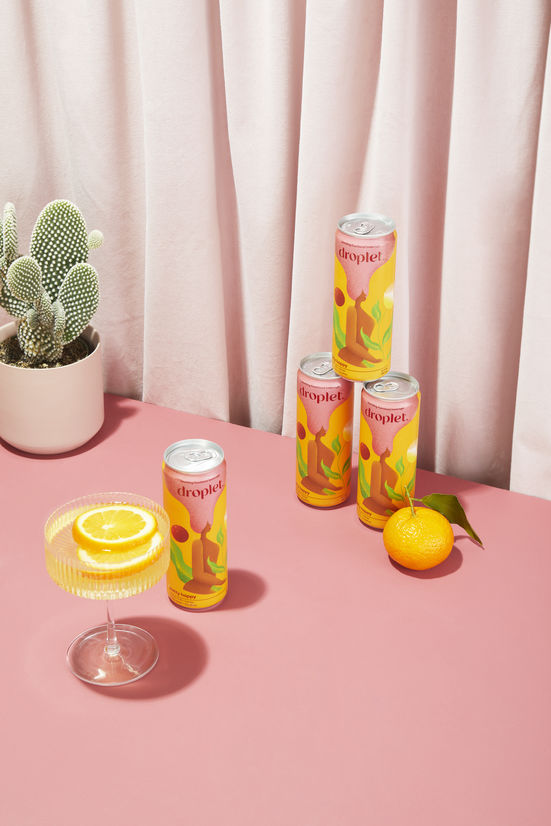 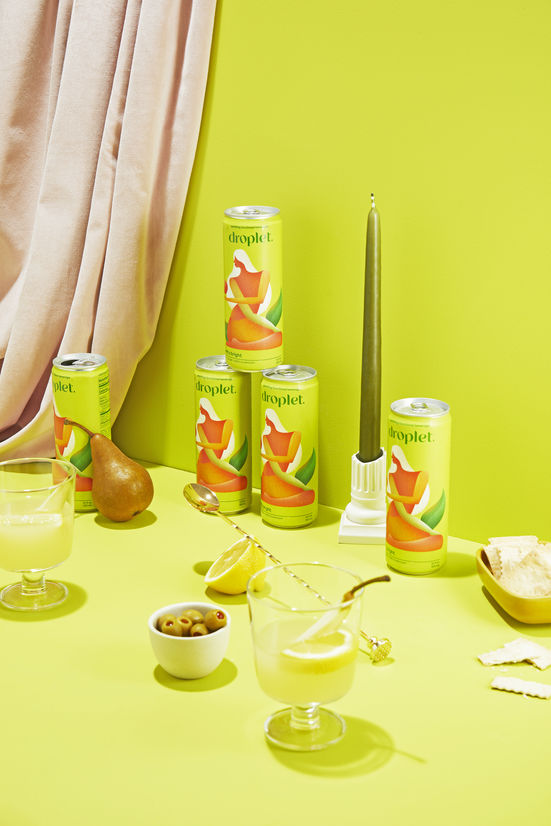 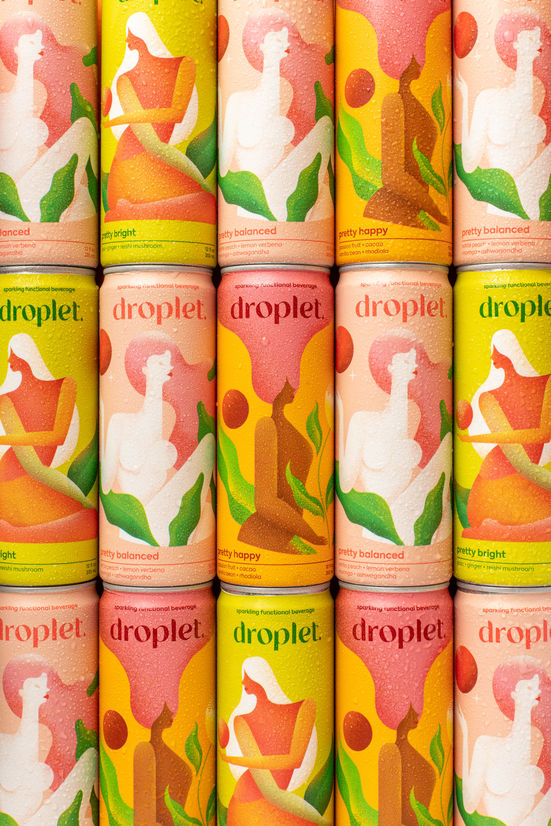 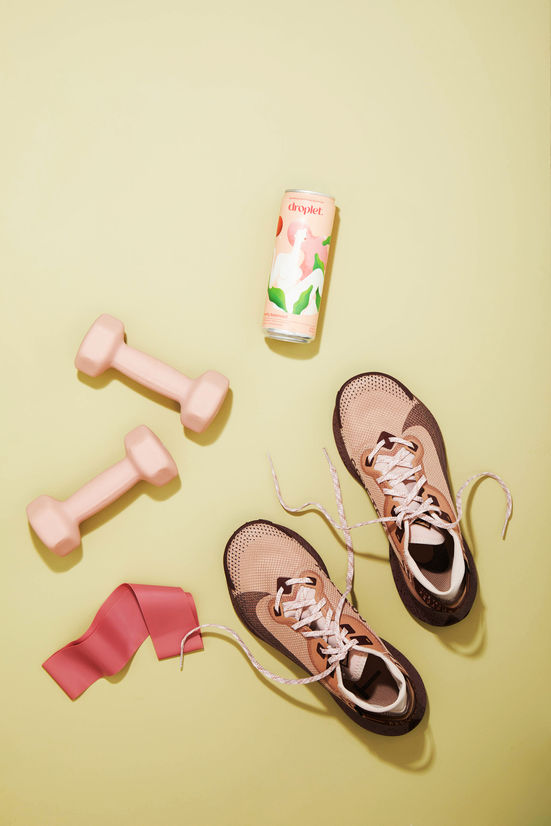 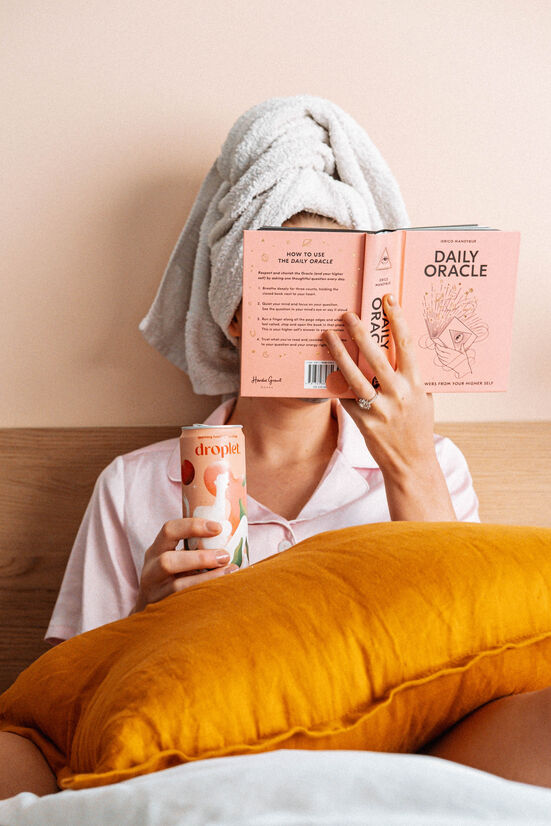 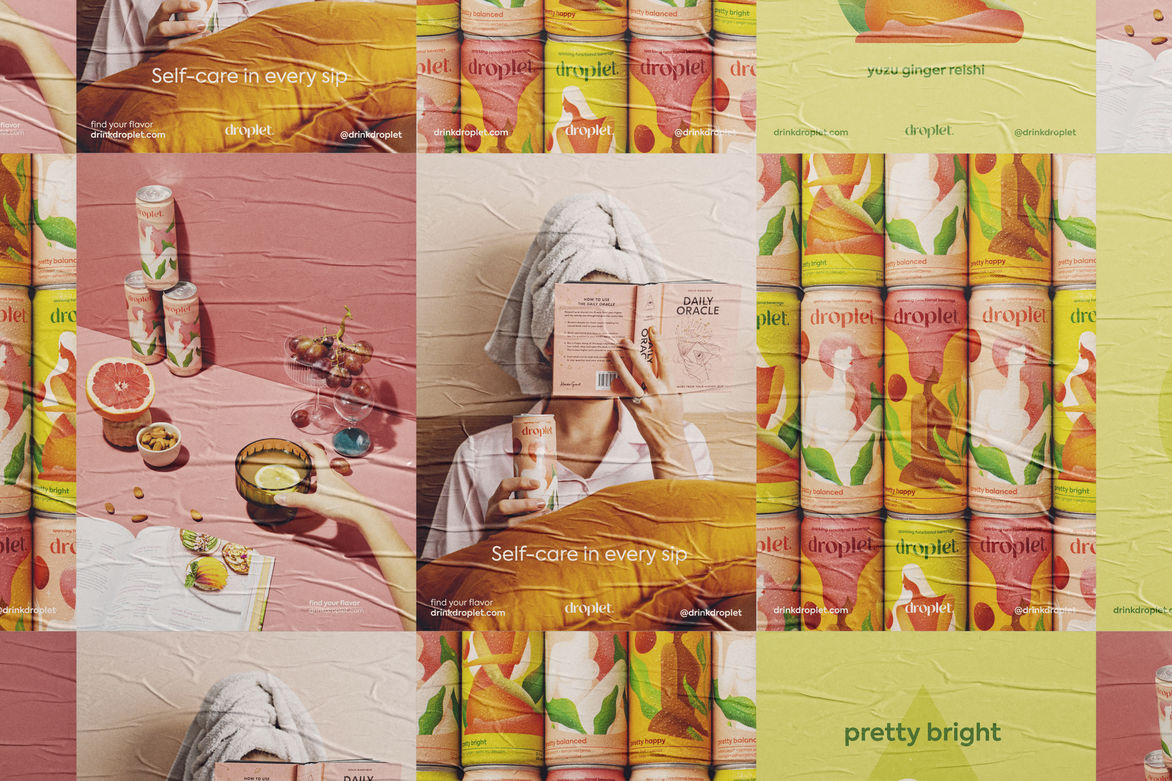 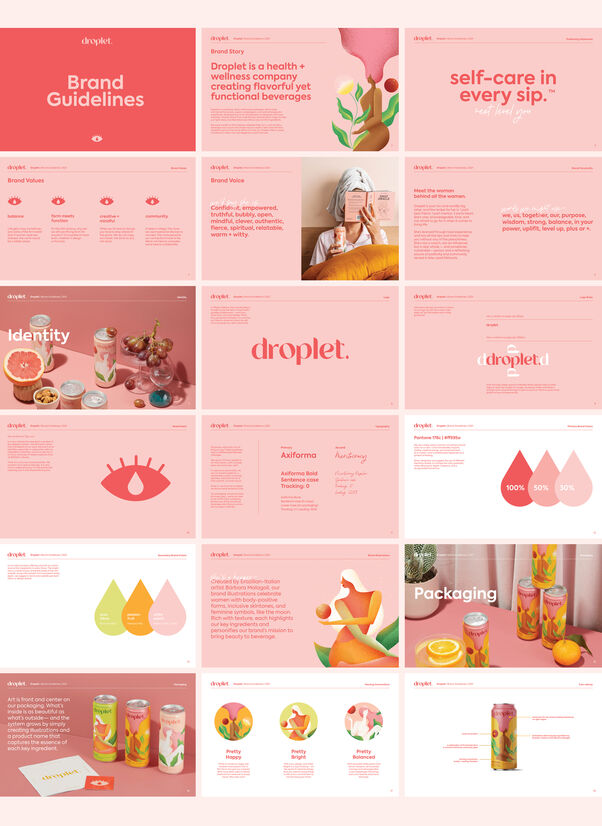 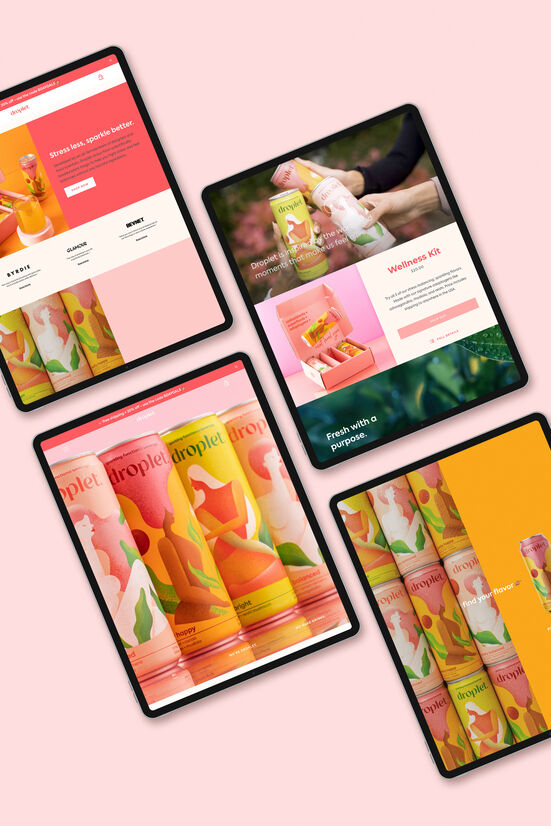 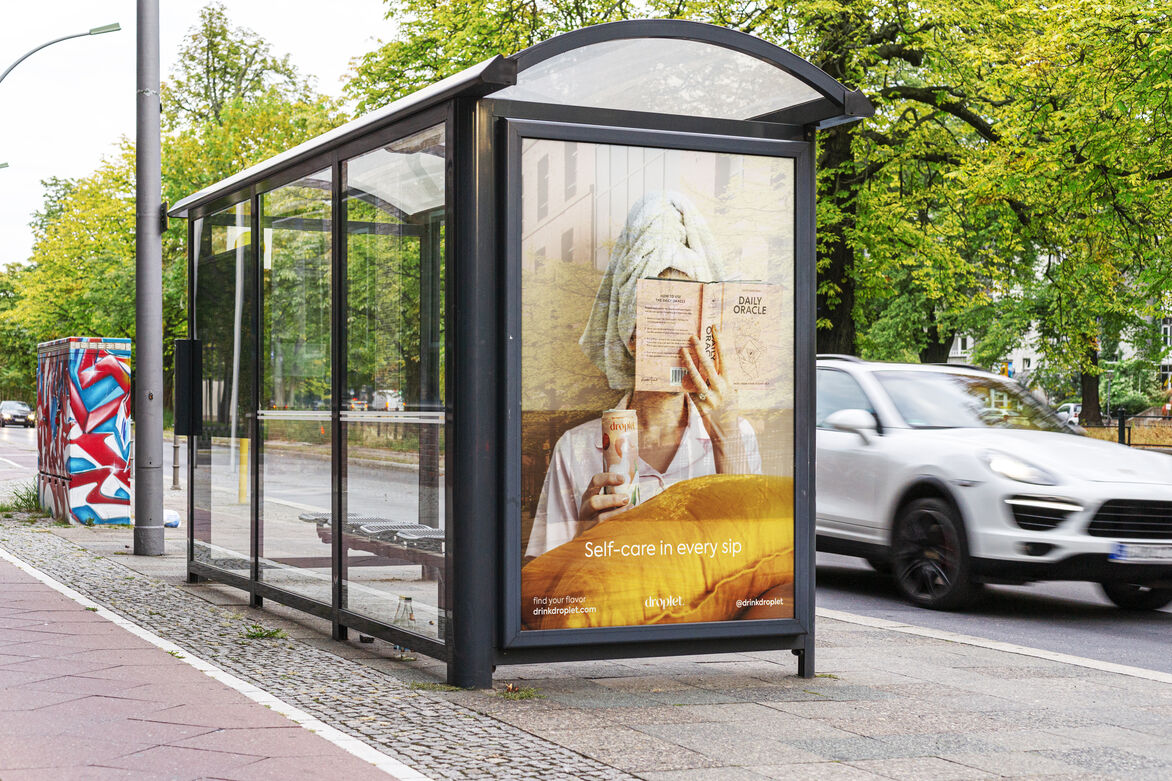 Droplet is a stress-balancing, sparkling beverage with organic adaptogens, whole fruit purées, and aromatherapeutic superfoods. Designed with the modern woman in mind, Droplet seeks to provide self-care in every sip; every flavour created with intention.

Just after the Droplet's launch, founder Celeste had a pitch meeting with one of the largest beverage distributors in the US. Though he loved the flavors, he was hesitant to stock Droplet, voicing his concern that Droplet looked like "a feminine health product', to which Celeste replied: 'It is— and Droplet is the face of self-care for every modern woman’.

Our goal was to create a beverage aesthetic and brand identity that spoke to the “real woman” amongst a sea of granola naturals and male-centric energy drinks. At the time, adaptogenic beverages were uncommon and were largely designed to suit the tastes of the alternative health audience, or only found in athletic performance drinks. With an all-female design and food science team, the choice was made to “bring the inside out” by having the outer packaging reflect the formula and key ingredients.

In Filipino folklore, the morning dew is thought to be the tears of the health goddess Dalikamata— and if you drink them, you’ll be healed. A gentle nod to founders Celeste & Adrienne’s Filipino-American heritage. The company then became Dewdrop, Inc. and the product was named Droplet as an homage to the mythical elixir.

The brand identity created for Droplet is less about systems & more about flow, it’s a self-love & self-care movement. Droplet’s social media presence is characterised by vulnerability, openness, and transparency with its customers, as a way to differentiate from the soft drink industry’s reputation for being secretive and misleading in terms of marketing tactics and health concerns.

Inspired by each flavour, original artwork was created by Brazilian-Italian artist Bárbara Malagoli. For example, if the key ingredient was yuzu lemon, then the artwork reflected the fruit’s colours, textures, and essence. Each flavour is identified by a true work of art on the front of every can, celebrating the female form in abstract, but body-positive and inclusive illustrations of women.

Each illustration also shows each ‘Droplet’ holding the moon essence. This element is then followed through on the bottom of the can where you’ll find the moon phase at the time of canning, printed in small detail. This idea of earth & moon connection is a large part of the Droplet story and voice.

Since its launch the day COVID-19 lockdowns began in Los Angeles, Droplet has quickly grown its following via social media, launched a podcast, and established distribution throughout almost 300 independent retailers throughout the US and Canada. In just a year, Droplet has also been nominated for Best New Beverage at the Natural Products Expo West Awards, and has received accolades from food and design outlets alike.

Next up? Droplet World Domination. The brand has aspirations to go global, with distribution in the UK/Europe and Asia/Pacific regions in the works.